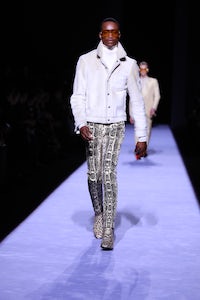 NEW YORK, United States — It was classic Tom Ford — and that was the point.

The stark, Instagrammable logo set in high relief as you entered, the front row stacked with celebrities and influencers, the creamy lavender walls, the plush carpet, even down to the champagne flutes with their quivering beads of condensation, it all added up to Mr. Ford’s cinematic and decadent chimera of the jet-setting high life. Before the first model hit the runway, you were swept away into Ford’s immersive point of view: Indulgence with a knowing wink, if you will. Call it a comeback? Sort of.

A comeback because in recent seasons, Ford has tried showing his collections in a variety of formats (online videos, "see-now, buy-now") and locations (Los Angeles and London.) But now he’s planting a flag in New York, in part because it’s an easy trek from Los Angeles where he’s settled into a fatherly routine and thus, where he’s recently relocated his women’s design team (the company also maintains offices in New York and London.)

The line up of lithe yet beefy men in only underwear, socks and watches that closed the show? Classic Tom Ford, as well as a cheeky way to demand everyone’s attention and to announce — ta-da! — that he’s launching underwear, available in seven different skin tones plus festive patterns like zebra and cheetah, or silk with velvet waistbands. In a genius stroke, they’re lined in cotton, marrying ultimate comfortability with ultimate excess. “I’m going to have to start wearing underwear,” Mr. Ford purred backstage before admitting that now that he has children, he’s gone from sleeping in the buff to wearing underwear to bed. When asked why he decided to launch underwear, he cocked an eyebrow. “I need the money!” Yep, classic Tom Ford.

Before the finale of barely there apparel, of course, Ford showed an extensive collection of his signature alpha male braggadocio, this time infused with some silky sensuality and luminescent sheen that begged for your hand to run over the smooth ripples in a pair of ice blue cargo pants, say, or the sharp shoulder of a swaggering camouflage sport coat. The palette of black, grey and white had hints of his new life in Southern California with its Barbie pinks and muted lemon yellow (backstage he admitted to expanding his own personal palette of all-black, to include some greys and browns — wink, wink). This all stood in contrast to the leitmotif of snakeskin and the mix of high-tech ski gear in chilly, shimmering shades, perfect for, oh, a rock star headed to Gstaad.

“We make beautiful suits, and its a big part of our business,” Ford said, “but we make a full men’s collection that I don’t think people realise we make — jeans, tennis shoes, everything. I wanted to show where we are right now.” That included python puffer jackets, silky shirting, silver fleece jackets, and evening wear in dazzling metallics. For more restrained menswear enthusiasts, there’s checked suits, trucker jackets in supple suedes, and turtleneck sweaters. Something for every taste, if not every wallet.

You have to respect the clarity and hair-splitting precision with which Mr. Ford articulates his world — blending the glamour of a Slim Aaron’s photo with the sex of a Helmut Newton — and how fully it’s realised. It feels aspirational but almost attainable and fun to boot. After all, Mr. Ford is himself living that life, all the while having a blast. Shouldn’t that be a lesson to us all?

If the holy trifecta of a good fashion collection is sexual heat, a sense of humor and a bit of romance, then this collection might be one to bookmark for a rainy day. It plays all three against each other superbly. But, hey, that’s just classic Tom Ford.