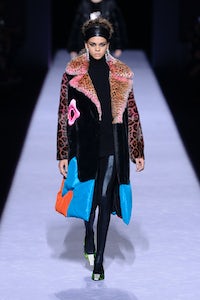 NEW YORK, United States — If the men’s collection Tom Ford showed the other day was a hybrid of London and Los Angeles, he insisted that the women’s collection he offered on Thursday night was LA all the way — the flash, brash side of the city, Sunset Strip fishnets and sparkly kitten heels, none of that floaty ladies-of-the-canyon stuff. These clothes were most definitely in the business of SHOW!, and they were all the better for it.

Blame making movies for distracting Ford from fashion. While he was honing that craft to spectacular effect, his womenswear wavered. But here, minus distraction, his showman’s instincts were as focused as klieg lights – and just as glaring. A sweatshirt picked out “Tom Ford of Beverly Hills” in sequins. That was a declaration of naked intent. Almost everything was shining or sparkling. Star of the show was feline Joan Smalls in a big cat fake fur over lamé leggings. Later, she wore a load more leopard print in abbreviated tiers of flaming red chiffon. Ford was definitely loving lurid, in sequined and python-print pantsuits. There was sheer exhilaration in the dresses that patched pattern and texture.

If the effect was vaguely reminiscent of the work of Kaisik Wong, the San Franciscan whose “wearable art” of the 70s has inspired designers ever since (and heaven knows that ties into Ford’s Californication), there was also a sense that he was tapping into the same exuberant appreciation of fashion’s appeal to the senses and its power to entertain that fired up Donatella Versace’s spring collection and continues to sustain the Gucci phenomenon.

If there’s anyone who has an instinctive understanding of such things, it’s Tom Ford. It's often said that conflict is the essence of drama. And that is why, in the midst of flagrantly shiny animal life, he paraded Kaia Gerber in a pristine black velvet dress, schoolgirl-short, sweetheart-necklined. But it sparkled at collar and cuffs, and it was accessorized with huge diamantine earrings. Pure as the driven slush, Mae West used to say. Ford couldn't have put it any better.