At Tom Ford, Aspiration in Excelsis

The designer overcame whatever reservations he may have had about revisiting his past, and any mojo lost has been well and truly recovered. 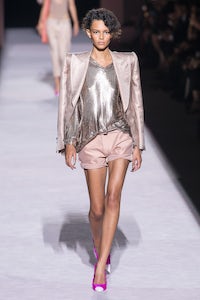 At Tom Ford, Aspiration in Excelsis

The designer overcame whatever reservations he may have had about revisiting his past, and any mojo lost has been well and truly recovered.

NEW YORK, United States — Tom Ford was smelling fucking fabulous after his show on Wednesday night. No, really, that’s the name of his new perfume. On him, smoky, sensual. On me, gone in minutes. That elusiveness has always been the way with Ford’s world. It’s like a club, a secret society, criterion for membership a glamour so innate it can be carelessly shrugged off, a mere bagatelle except for those who weren’t born with it and spend their existences in pursuit. In the mid-90s, this was Ford’s incredible, industry-transforming power, a dazzlingly honed sense of exclusivity based on life’s genetic lottery. It lit up his shows, first Gucci, later Saint Laurent. Like fashion aspiration in excelsis.

That particular aspirational quality is exactly what has made Ford’s career in filmmaking so successful. The intensity of a lifelong ambition finally and fully consummated lights up the screen, especially in the extraordinary "Nocturnal Animals." But it’s been a long time since there was such intensity in his fashion, his womenswear in particular. “I don’t think it’s been wrong,” Ford conceded last night. “It’s been uneven.” He partially attributed that to the long road back from his drinking days. It’s been a challenge to find that sweet spot of “joy, silliness, flamboyance” that booze bequeathed so effortlessly. “It takes a while to be sober,” Ford acknowledged sagely. But, as far as he was concerned, any mojo lost had been well and truly recovered with Wednesday’s presentation.

He overcame whatever reservations he may have had about revisiting his past and infused his collection with echoes of his glory days at Gucci and Saint Laurent, from the satiny slouch of cargo pants to a shirred evening dress in a distinctive shade of dead salmon. The steamy athleticism of tanks, rolled shorts and track pants mirrored moments of his time at Gucci, just as the provocation of beaded micro-dresses and mutated “le smoking” might have been a Saint Laurent moment for him.

“I’m the same person, I’m going to like the same things,” said Ford. That kind of consistency could almost constitute “authenticity” (an aspirational benchmark in the second half of the second decade of the 21st century, like its handmaiden “relevance”) except that Ford has always been an arch-ironist, and irony tends to be the enemy of authenticity.

Which might be why he would ultimately appreciate the main reason why his show on Wednesday night was not a complete success. It felt like a pastiche. He claimed he’d always approached his woman as a character, but now he has movies to explore that notion to the max, so maybe that’s why his fashion character felt a little thin. There was one telling detail: the shoes were frayed, their heels and toes dipped in white by Ford himself. “Hints of the slightly destroyed,” he called them. And that sense of things about to tip over the edge was possibly the most authentic thing in the whole collection.