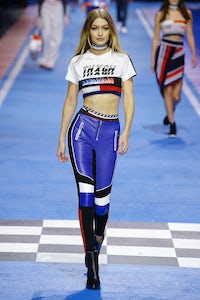 MILAN, Italy — Tommy Hilfiger did urban in New York, beach in LA, rock in London… that left Milan for his ode to car culture. The city is, after all, home to Alfa Romeo. Fiat’s in Torino to the West, Ferrari in Modena to the East. But it was actually his new partnership with Mercedes-AMG Petronas that Hilfiger was celebrating. As well as being the fashion world’s most famous Rolling Stones fan, he’s also a Formula One freak.

So Milano Congressi, the largest convention centre in Europe, was turned into a racetrack, an experiential immersion in #TOMMYNOW, part trade fair, part fun fair, all Hilfiger fashion. It was an immaculately staged, precision-tooled evening which offered tightly edited insight into the Tommy multiverse: bathing suits and varsity jackets, college stripes, denims with a self-aware (I hope!) wink at his contribution to logo mania, preppy red, white and blue everything. Plus some other fashion-savvy stuff that was a little less predictable. Like the pairing of a speedy little leather bolero and grey jersey track pants. Or the sheer logo dresses over racing check undies sported by Winnie Harlow and Joan Smalls. In a parallel, more ironic universe, you could almost picture them in a Jean Paul Gaultier collection.

It was hard to imagine any of this happening without Gigi Hadid. Her GHxTH collab has gilded Hilfiger with Millennial fairydust, and watching her work the catwalk on Sunday night was an education. Authenticity is allegedly the lure that hooks the Millennial carp. Hadid looked authentically gracious in her acknowledgement of cheering fans, fellow models, and the man who made it all possible. He looked pretty happy too.