The hundreds of kids inside and outside the Roundhouse proved that the designer is a master manipulator of fashion-as-aspiration. 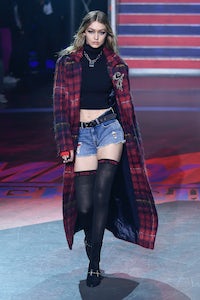 The hundreds of kids inside and outside the Roundhouse proved that the designer is a master manipulator of fashion-as-aspiration.

LONDON, United Kingdom — You can only imagine how Tommy Hilfiger, diehard rock’n’roll fan, felt about staging his London show at the Roundhouse. Big clue: when he took his bow, he was wearing a biker jacket with the Rolling Stones logo plastered across the back. The Roundhouse has long been one of London’s most hallowed music venues, famously the spot where the Stones played their last gig in England before they went into tax exile in 1971. Added value for Hilfiger: Mick’s daughters Lizzie and Georgia May walked in the show.

But if you can take the boy out of the country, you can’t take the country out of the boy. Roundhouse or not, Hilfiger stuck with Americana, mixing his four collections into one red, white and blue stew of college boys, grunge girls, hip-hoppers, skaters, preps. The one that’s making the most noise right now is TommyXGigi, his collab with Mlle. Hadid (followers 35.7M) and her presence clarified the point of the whole extravagant exercise. After the models had walked the floor where the press sat, they climbed the stairs and paraded around the gallery. That’s where the followers were (out of the audience of 1800, 800 were customers). Gigi’s victory lap sparked a frenzy. Jourdan Dunn came close, playing to the gallery. Internet broken, in someone’s PR fantasy.

Go big or stay home. Well, Tommy’s gone plenty big on his home turf, but closing out London Fashion Week with a show that attached the arena atmosphere of a sports event or a rock concert to a fashion show was intended to make the locals sit up and take notice. Maybe even get up and dance, when frat bro superstars the Chainsmokers took centre stage after the models and acrobats had left (forgot to mention, the event was tagged RockCircus).

Gigi opened the evening in a full-length plaid coat in wintry mohair over distressed denim cut-offs from “her” collection. This was a reminder that the presentation was a see-now-buy-now proposition. Winter is coming, and Gigi will keep you warm. For the finale, she appeared in a warped mirror image of the same look from Hilfiger’s own line. This time, the coat was actually a sheer silk maxidress, unbuttoned over black leather shorts. The distance travelled between those two outfits, literally and figuratively, told the story of the show. It also told the story of Hilfiger’s renaissance as a master manipulator of fashion-as-aspiration. Like every successful entrepreneur, he starts with his own fantasies. And there were hundreds, maybe thousands, of kids inside and outside the Roundhouse who got it.