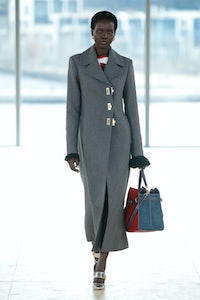 NEW YORK, United States — Josef and Anni Albers. Dorothea Rockburne. Cy Twombly. Robert Rauschenberg. Merce Cunningham. John Cage. Buckminster Fuller. Franz Kline. Willem and Elaine de Kooning. Allen Ginsberg. All of them, every single one, was associated with Black Mountain College, an experimental art school set against the back drop of the Blue Ridge Mountains in North Carolina. (Some were teachers, like the Albers, some visitors, like Ginsberg, others students, like Rauschenberg.)

Black Mountain opened in the early 1930s during the Great Depression, and closed less than 25 years later in a conformist, post-war America. Tory Burch, who often looks to modern artists to inform her designs, seemed to have chosen just the right time — another uncertain moment in American history — to revisit Black Mountain. “We all have to look at their ideas, in a way,” Burch said backstage before the show. “It’s very appealing and so current.”

And so off she went. The season’s wonky take on collegiate dressing felt rich: a bit riskier than the usual TB fare, with extra-chunky square palettes stitched onto a mixed-print floral caftan, button holes embroidered with geometric shapes and neck ruffles making multiple appearances. There was no dominating print, colour or era. (You had a little bit of 1980s here, 1940s there.) And yet, despite all the disparate elements, the collection had plenty of charm. I only wished the set was more elaborate; I wanted to see more Black Mountain.

The through-line came in the form of the additives: the silver-and-gold Mary Janes, the crystal earrings, the shiny leather boots. Accessories are still the thing for Burch, who earlier this year hired her husband, longtime LVMH executive Pierre-Yves Roussel, as her new chief executive. They’ve got some challenging years ahead of them as players at every price point battle for relevance. But they also have one of the strongest brands in American fashion.