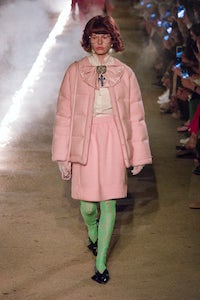 ARLES, France — What Alessandro Michele loves about the Chateau Marmont in LA is the notion that someone in Hollywood’s shaded past was so obsessed by the notion of a French chateau that he saw fit to duplicate it on Sunset Boulevard. Picture the silent movie stars spinning down the dirt road that Sunset was in those days in their fabulous Hispano Souza limos. Michele does. And that vision of something simultaneously ersatz and grand infuses his work.

It’s a mesmerising balancing act, and Michele is able to pull it off so successfully because, as much as he’s drawn to the cartoon-iest New World culture, he is an old European soul. Old enough that he showed his cruise collection in a necropolis In Arles, in the South of France. With thousands of dead souls simmering below the fog-shrouded venue’s surface and rivers of fire licking the path the models took between the tombs, he mounted another of his extraordinary, atmospheric interpretations of Gucciland. Even the deluge that threatened all day magically withdrew as night fell.

Maybe the presence of the dead wasn’t such an off-piste idea. It’s not exactly like Michele is a necrophile, it’s just that he has a peerless ability to animate vestiges of the past, recent and distant. Did you ever imagine a Chateau Marmont laundry bag would become le dernier cri in arm candy? OK, get ready.

If you so chose, you could distil this collection into the bits and pieces that boys and girls will slavishly fall upon in their local Gucci store. A certain footwear interest, things below the waist, veils and trains for maximum drama. At this point, it seems irrelevant to judge what Michele does in terms of the conventional collection breakdown. So maybe there was a gorgeous floral puffa jacket. Or a camel coat with a tracery of glitter. Or sequins encrusting everything. This is how Michele transfigures the familiar in a way that absorbs a fashion-hungry clientele. And then the commercial stuff that follows — the trainers, the leggings, the backpacks — takes on an eerie, irresistible gloss.

But, because I’m reviewing a show, it feels right to mention the guy trailing a Brideshead teddy, or all the models clutching bouquets of dead flowers. We were in an ancient Roman burial ground, after all, but the layer upon layer of references in the clothing also felt like memento moris of every book, movie and piece of music Michele has ever loved. We can only love him for the way he transports us to places of darkness and joy and fantasy. Like a fake chateau with a legendary heritage.

Disclosure: Tim Blanks travelled to France as a guest of Gucci.