Kim Jones said collaborations with the Chapman Brothers and Supreme made him keen to refresh his relationship with his old customers. 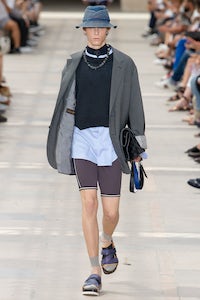 Kim Jones said collaborations with the Chapman Brothers and Supreme made him keen to refresh his relationship with his old customers.

PARIS, France — Kim Jones has the itchiest feet in fashion. Is there anywhere he hasn’t been? So, when a friend gave him Atlas of Remote Islands: Fifty Islands I Have Not Visited and Never Will, he could honestly say he had been there, done that. But the gift did have a use. Jones needed something punchy after his Supreme collab last season, and the idea of island-hopping indulged his own inclinations while it also dovetailed with Vuitton’s own sense of itself as a company whose lifeblood is travel.

Two islands ruled the collection: Hawaii and Hong Kong. The former provided the showstoppers: rayon Aloha shirts, layered with filmy organza versions which created an optical illusion, like flowers viewed through shimmering water or a sheen of oil. Gorgeous! The latter was the source of unstructured, over-sized tailoring. Unsurprisingly, the two worlds didn’t sit together so comfortably.

Hawaii was the source of the collection’s intense physicality: the “wetsuit” — jacket and shorts — made from lambskin bonded with neoprene, the similarly second-skin leggings, the billowing nylon outerwear, spiritual heir to Miyake’s windcoats. And they weren’t wearing frat boy puka shells — the necklaces were actually “coral” made from dyed horn.

But the sensuality was muted by the suit-iness of the Hong Kong element, the urban island. The model casting, young and scrawny as the current mode dictates, tended to highlight that side of the collection. It would be interesting to see sun-bleached, sand-blasted surf-rats treating the clothes with a healthy disrespect. It would surely give them an entirely different kind of life.

Jones said the collaborations with the Chapman Brothers and Supreme, which have brought Vuitton a whole new tribe of acolytes, made him keen to refresh his relationship with his old customers. The reach-out was obvious in a sinuous suede trench or a knit-backed croc top, old school luxe. Drake contributed an original song to the soundtrack, which was apparently inspired by the collection. There’s a lyric sheet I’d love to read.