Zendaya and stylist Law Roach turned the runway into a celebration of black beauty in fashion with a glamorous, dressy collection that took inspiration from Zendaya's memories, both lived and imagined. 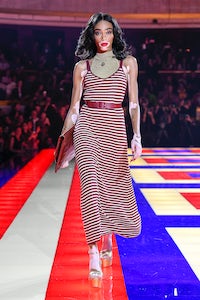 Zendaya and stylist Law Roach turned the runway into a celebration of black beauty in fashion with a glamorous, dressy collection that took inspiration from Zendaya's memories, both lived and imagined.

PARIS, France — Tommy Hilfiger was so overcome when Zendaya and her stylist Law Roach presented ideas for their proposed collaboration that he started shaking. “The inspirations they brought me were everything I love,” he remembered. “I told her she could do whatever she wanted. And we could deliver it for her.” For Hilfiger, it wasn’t simply about hiring a face to be brand ambassador. The success of the Gigi Hadid collaboration moved the goalposts. “But I know in this business you have to move on. And Zendaya can help us evolve as a brand, become more sophisticated.”

So that’s what Tuesday night’s gala launch of the collaboration at the Theatre des Champs Elysées was all about. Evolution. It just so happened to take place in the white heat of a disco inferno. Hilfiger said everything – from the music, the casting and accessories to the hair and makeup – came from Zendaya and Roach. “Her fanbase is going to see it comes from her and I want her fanbase.” The 54 million Instagram followers? Well, even more. As 22-year-old Zendaya herself pointed out, she’s Z for GenZ, but she’s also cusping on the millennial billions.

She could also, on Tuesday’s evidence, give the Greatest Showman a run for his money. Something else Zendaya and Roach brought to the table was the story of the Battle of Versailles, the 1973 face-off between five of the best French designers against five of America’s finest in a fashion show at the Palace of Versailles. It was a publicity stunt to raise money for the palace’s renovation but you know how these things get real real quick. The American designers used eleven black models, including Pat Cleveland, Bethann Hardison, Billie Blair and Alva Chinn. The French went crazy for them, and the way fashion looked changed overnight. When Hilfiger heard this story, he knew there was only one place to stage the show. PARIS!

So it’s 46 years later and diversity on the catwalk has been one of the biggest issues of the past couple of years. Tuesday night was a celebration of black beauty in fashion, all shapes and sizes and ages. Cleveland walked again. So did Beverly Johnson, who, in 1974, was the first African-American model to make the cover of American Vogue. Grace Jones gloriously hogged the spotlight for an extended vamp down the catwalk to “Pull Up to the Bumper.” Then everyone gathered at the end of the catwalk to welcome Hilfiger and Zendaya to the anthemic inevitability of “We Are Family.”

It was a spectacular evening, but what of the collaboration it was in service to? Zendaya was skeptical when Hilfiger first called. She’s been down that road of empty promises before. But when she realized there was no need for nerves, she did what any fashion-lovin’ 22-year-old would do (aside from call her stylist). She unearthed all the banked references that had shaped her own sense of style. “I looked at all these old photos of my grandmother and my aunties, scarves wrapped around their ‘fros. They’d throw on this beautiful beaded thing and go. There was an effortless glamour that felt so authentic to who these women were. They never felt afraid or controlled by other people’s opinions of them.” There they were on the mood board, along with Zendaya’s dad in his bellbottoms and giant-collared shirts. But there, also, were Bianca Jagger and Farrah Fawcett.

Stir it up and put all that on a catwalk. Zendaya’s memories, some of them lived, some of them imagined. A white, bell-bottomed suit, for instance. That spoke to her now. “We dug through Tommy’s archives and he was known for tailoring,” said Roach. “It was important to have the DNA of the brand.” A print that was a psychedelic mash-up of zodiac signs reminded Hilfiger of a Jimi Hendrix album cover. Zendaya wanted it not only in a jacket but also as wallpaper and bedsheets. More glamorously, the lines in a windowpane check were picked out in sequins. There are tremors of a new era of dressiness in fashion. To feel them in Tommy Hilfiger’s latest collection suggested tremor could become quake. “This is a new energy we’ve never done before,” he gushed. Remember, it’s already given him the shakes.