To mark his 10th anniversary, Alexander Wang created a kind of critique-resistant streetwear chaos, focused squarely on the needs of his growing global tribe. 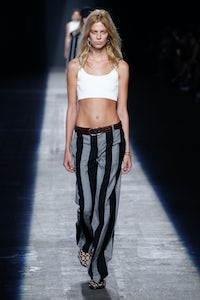 To mark his 10th anniversary, Alexander Wang created a kind of critique-resistant streetwear chaos, focused squarely on the needs of his growing global tribe.

NEW YORK, United States — Alexander Wang’s message with his 10th anniversary celebration tonight was as wayward as the exuberant, hair-tossing sprint down the catwalk with which he always finishes his shows. Coming off his stint at Balenciaga, he was clearly fed up with the industry’s hunger for “What’s Next?” His response? Reflect on what’s around us now! Reject “innovation!” The mundane is inspirational!

The sheer logic of that stance is irresistible. It’s fashion’s version of Be Here Now, Alexander Wang recast as Ram Dass. It was also a fiendishly canny move on Wang’s part because it allowed him to create a kind of critique-resistant streetwear chaos on his catwalk. “There’s not a single story-line, not a single type of girl,” he burbled post-show — or boy for that matter, because there were men on his catwalk for the first time.

So there were frayed denim cut-offs. And there was a charmeuse slip. There was a pyjama top. And there was a blanket-check shirt. There were dungarees. And there was a black leather bustier. Then there were the hybrids, the moto/denim fusion, the army jacket with luxuriant fringing, the surreal crossbreeding of peignoir and baseball jacket. Vintage, military, street, sport, club-kid ingenuity… these were Wang’s building blocks when he started out a decade ago. He borrowed them from the people around him, so nothing’s changed in that department, a point which was rammed home by the furiously ADHD video, created to celebrate his anniversary.

Wang claimed that one lesson learned from his time at Balenciaga was the value of teamwork. At his own label, he has always treasured tribalism, “the feeling that you belong,” he called it. “After ten years, it’s the love that stands out, finding my tribe.” For those still seeking their’s, there was rock-concert merchandising in Pier 94’s foyer, the t-shirts an easy ticket to the Wang tribe. But will that be enough to sustain him as he enters his second decade in business? That is the multi-million dollar question. 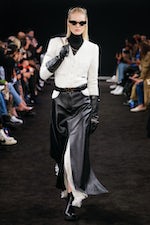 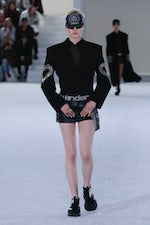 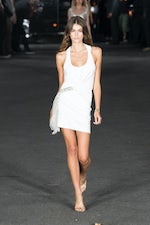