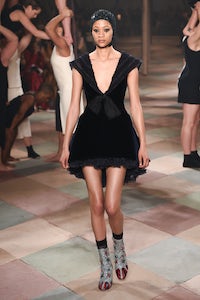 PARIS, France — Four years ago, Maria Grazia Chiuri was trapezing on Manhattan’s West Side with Vanessa Friedman from the New York Times. Proper up-in-the-air upside-down stuff. Her openness to such fearless acrobattery suggests there’s something of the circus in her blood. Perfect for a couturier, as Chiuri realized when she was working on her new collection for Christian Dior. Fashion is a circus. Every season, it rolls into town and the world plonks itself down ringside. That’s because people love the big top. "The Greatest Showman" triumphed over bad reviews to become a box office smash. Isn’t that every designer’s dream?

Dior has history with the circus. Richard Avedon’s photograph of a Dior-clad Dovima with the elephants at the Cirque d’Hiver is probably the most iconic fashion image of all time. When Christian showed at London’s Savoy Hotel in 1950, the Pathé newsreel in every movie house in the land trumpeted “The Dior Circus Comes to Town.” It was that particular morsel of research which confirmed Chiuri on her own particular path with this collection. The rest of her research — the Picasso-designed productions by the Ballets Russes in Rome and Naples, Fellini’s movie "The Clowns," Gérard Vicaire’s couture-quality circus costumes in Paris — provided an extravagant window-dressing. The last part of the jigsaw was Mimbre, a London-based all-female acrobat troupe.

Chiuri couldn’t scarcely have wished for a better physical embodiment of her commitment to women supporting women. As was graphically exhibited under Dior’s big top on Monday, the health and wellbeing of the acrobats ofMimbre literally depends on their trust in each other to catch and hold and let down gently. Quite amazing — and unsettling — to watch. The extravagant, arduous physicality of Mimbre's performance was reminiscent of the choreography of Sharon Eyal and her company in Dior’s last presentation in the way that it threw an emphatic but slightly contrary spotlight on Chiuri’s collection. In her clothes, she was clearly exalting fragility and light, the airiness of the acrobat’s art, rather than the all-consuming, endless and potentially dangerous practice.

But Chiuri is intimate with couture’s other face – the blood, sweat and tears that produce a collection – and, as ringmaster, it’s her challenge to transmute that into transcendent beauty. Did she achieve that on Monday? Her collection certainly covered an extraordinarily wide waterfront. There were short, sparkly looks to satisfy your inner trapeze artist. There was stark, elegant monochrome that evoked the classic Pierrot. There was a gilded, plissé glamour that made you think about the long bygone days when the circus was a cultural force (what else when your fans include Picasso, Cocteau, Diaghilev and Satie?). And then there was the modernity Chiuri managed to bring, unhinging tradition by washing the hell out of the satin that made Adut Akech’s gown, lavishing a top (over microshorts) with embroidery that wove its own occult tale, doing things to tulle that no one could anticipate.

She herself is fiercely committed to the idea that she can make couture something that women her daughter’s age will want to wear. Set aside cost considerations, and you could see Chiuri working her way towards that goal with this collection. What you couldn’t see was many of the women under her big top coming to play. But if "The Greatest Showman" proved anything, it was that you’ll never go broke by expecting the unexpected.