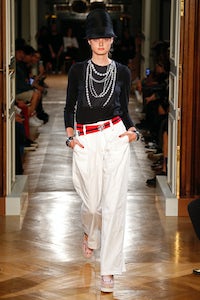 45 View Collection
Fashion Week
Share
2 Comments
By Tim Blanks October 1, 2016 15:14
Share
2 Comments
By Tim Blanks October 1, 2016 15:14
PARIS, France — It’s a new season, you sit through show after show in city after city, love some, not so much others, and you’re waiting. Don’t know what for but, as long as you close down your capacity for disappointment, you trust it’ll come. And then it does. Or rather it did. Friday night. Jun Takahashi’s Undercover.
On the soundtrack, the first stroke of a piano key. Was that Bill Evans? Yes! Only in Tokyo, the ardent, uplifting fetishisation of Americana,  the total, transformative submersion in fanboy-dom. Anyone who has ever experienced idol worship (anyone who surrendered to Bowie at the peak of teenage, all those who will at some point look back on their Belieberhood in wonder) could feel Takahashi’s passion, translated so beautifully into a collection of clothing.  He is so weirdly good at this — a men’s collection built around his love of the band Television stands for all time as a peerless example — that he is fashion’s best example of the faith that passion persuades.
And persuade it did. Takahashi has been listening to jazz for a couple of years. He said it helped him relax. His clothes reflected that: cool, hands-in-pocket slouch, baggy pants, ruched blousons, tweedy cardigan jackets, a loose jazz/hiphop hybrid vibe. You could imagine the models as girls on the bus, on the road with the musicians, the po-boy caps and do-rags a cool affectation. They were dabbed with freckles. Did Takahashi have someone special in mind? Bill Evans’ album Waltz for Debby was referenced in the graphics. Was Debby, Evans’ niece, for whom he wrote the title track, the freckled girl? Takahashi thought maybe. Did it matter? No.
Jazz album graphics in the 1950s were some of the finest popular art of the day. Takahashi printed them on long skirts. Sounds odd, looked great. He also printed isolated elements of the graphics — abstract representations of instruments — on sweats, and collaged them in leather in a stunning group of pieces that looked like Saul Bass movie credits given extraordinary life. (Maybe it’s just a blurry memory, but here I’m picturing The Man with The Golden Arm.)
Takahashi has always been a fiercely ingenious designer.  The ingenuity here was subtle, seductive rather than his occasional what-thuh? But what that really meant is women in the room could see themselves in the long, fluid beauties that needle-punched a cargo shirt into a fitted, knitted waistband into a long, silky album cover skirt. It all felt ludicrously, defiantly cool. And then Takahashi closed the place down with a parade of women in Bill Evans drag, suits, glasses, collar and tie, with a musical clef cut out of the back of each jacket. There’s a Man Ray image, Le Violon d’Ingres, from 1924, which did exactly the same thing. Frankly, if someone can take me back to Man Ray at the end of a day on the fashion frontline, I’m theirs for the night.