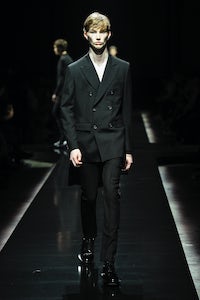 PARIS, France —“It’s the opposite of what everyone expects,” Jun Takahashi declared, after an Undercover show that was exactly that. “No more street style.” Though his new collection for Nike was backstage, his models wore polished leather Oxfords. (Takahashi’s Nike collection will be shown in another forum and another format.)

We have become accustomed to Takahashi’s presentations being wide-screen-cinematic in scope, hyper-coloured, crowded with characters. If this show was a movie, it was a black-and-white oldie, somber and shadowy. Jun said he wanted something serene and elegant, “nothing extra.” The runway was a lustrous procession of dark, double-breasted suits and topcoats. The music was from “2046,” Wong Kar Wei’s hybrid of sci-fi and film noir.

A spider-web pattern was pressed into shirts (the kind of technical effect at which Takahashi excels). Then a tone-on-tone silhouette appeared on jackets and coats. It looked like Nosferatu, most ancient of all celluloid bloodsuckers, the original black and white vampire.

He was supplanted by the artist Cindy Sherman, of all people, represented here by a handful of self-portraits from her most famous body of work, “Untitled Film Stills.” Again, the movies, again the black and white. Cindy’s photos were printed, embroidered, appliquéd, woven into a denim jacquard, used every which way Takahashi could find a fabric for them. It was impressive, obsessive, but it was cold. Maybe that was just how he wanted it. He said he’d been drawn to Sherman’s “calmness and eeriness.”

Aside from his rebuttal of street style, Takahashi wouldn’t be drawn on the specifics of his collection. He claimed he wanted to preserve its ambiguity. But the darkness was a given, and so was the ominous mood. A line from Dylan Thomas was printed on the invitation: “I hold a beast, an angel and a madman in me.” Let’s assume Nosferatu was the beast and Cindy was the angel.

That leaves Takahashi himself as the madman. He conceded that fear was the subtext of his presentation, and not only because of what he detected in himself. “We live in a horror movie,” he said. That's why, although Takahashi’s show wasn’t the slamdunk we’ve come to know and love from him, his stark, dark parade did strike an eerie chord. In his last picture show, it’s the men in suits that we have to be very afraid of.

Editors Note: This article was changed to reflect that Jun Takahashi’s Nike collection will be shown in “another forum and another format.”