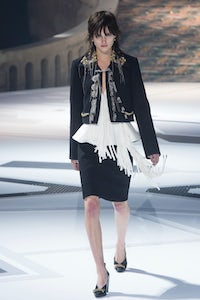 PARIS, France — The Cour Lefuel, one of the Louvre’s six internal courtyards and the only one open to the sky, has never been accessible to the public. It’s even been hard to look down on it from the museum because it’s so often been buried in scaffolding or covered with prefab buildings housing teams working elsewhere in the Louvre. Perverse, when it is an absolutely magnificent space, the massive ramps on which Napoleon III’s horses would return to their stables flanked by huge fiercesome bronzes — a dog, a boar, two wolves. You could only feel gratitude to LVMH for the opportunity to experience le cour before it was returned to inaccessibility (though this time, it’s going to be renovated for public use). It was the latest part of the Louvre to be utilized as a show venue by Louis Vuitton.

But if it’s perverse that such a grand slice of French history should be shut away for so many years, it was equally perverse that the collection it backdropped fell far short of grand, for all the high-powered front row and standing O at the finale. Nicolas Ghesquière’s strong spring collection, with its imaginative, idiosyncratic combination of past, present and future, would have done these surroundings more justice than the haute bourgeois lady looks he showed on Tuesday.

Sure, he twisted them, a hint of asymmetry there, a little extra volume there. This is, after all, Nicolas Ghesquière we’re talking about. And the first outfit, the black suit with the Judy Blame chain detailing, looked promising. That detailing returned every now and again, but it had to do a lot of the heavy lifting for suits or buttoned-down pencil skirts. The other recurring detail was a kind of rounded-shoulder capelet situation, one of those historical details Ghesquière likes to disrupt his modernism with. It looked curiously uptight.

Maybe that was the point. It’s in the nature of the haute bourgeoisie, after all. It’s their sexual undertow as well, because uptight promises the frisson of release – at the right moment. There were an awful lot of buttons in this collection, waiting to be unbuttoned. Made me think of Yves Saint Laurent, who had a peerless instinct for the power of restraint and release. He and the similarly inclined Luis Buñuel joined forces to make Catherine Deneuve’s Belle de Jour an enduring image of suppressed erotica. Sure enough, there was Deneuve in the front row, next to Jean Paul Gaultier, who has made hay with bourgeois sexual fantasies for years.

But it’s actually Buñuel's “The Discreet Charm of the Bourgeoisie” which has perfumed a number of collections this season, so there was something appropriate about Ghesquière's show, the last of the season, wrapping it up in a bow. No, strike that. No bows. Just suits, pleated skirts, bourgie black leather, and for all the fantasy corsets, disappointingly safe and dull.

The courtyard was tented for the show, but a sudden downpour proved too much for the plastic and some in the audience were drenched. Journalists catching the last train back to London were changing out of wet clothes in the lounge at the Gare du Nord. Where was Luis Buñuel when we needed him?