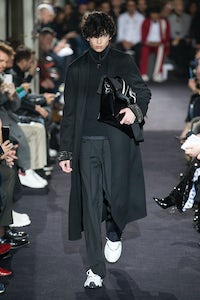 PARIS, France — Valentino’s backstage moodboards are a whole production number, crossing time and space to produce a philosophical and psychological profile of a collection. Consider Pierpaolo Piccioli’s latest. There was a portrait by Lorenzo Lotto, who, in the 16th century, controversially focused on the inner life of his male subjects, rather than their power or social standing. There was Adam Ant, all dolled up as a king of the wild frontier in the 1980s. There were a lot of Duane Michals photos, poetic portraits of pretty young men, alongside pictures of classical busts. And there was Robert Smith, lolling in a huge goth-y cloud of hair. “I don’t think a strong man today has to be powerful,” said Piccioli. “You can show your fragility and femininity.”

And so it was with the collection. If the inspiration was complex, the execution was relatively simple: two silhouettes, one with coats and trackies, the other with jackets and skinny trousers, both elegantly lean. The colour palette was uniformly dark – black, grey, blue – with six outbreaks of co-ordinated colour. The music was the low, somnolent croon of David Sylvian, proclaimed “the most beautiful man in the world” during the 80s heyday of his band Japan. It was definitely the soundtrack of a romantic, moody soul.

The atmosphere wasn’t remotely cut-loose, but the curious appeal of Valentino has always been its restraint, its chasteness. Piccioli claimed the way to change a man’s wardrobe wasn’t through revolution, which he wouldn’t relate to. Instead, the designer felt it was better to make the extraordinary ordinary. Take, for instance, an elongated double cashmere coat, intarsia-ed with a dragon or a tiger from an old couture collection (just think about what’s in those archives) and paired with trackpants and classic white sneakers. Piccioli decorated some coats with studs. The studs may be a new house signature, but these looked lethal. That seemed more about making the ordinary extraordinary, but he insisted he was thinking about kids in London customizing granddad’s old coat. Some models wore makeup, others wore beads. The randomness was part of the message. “It’s not about gender, not about sex,” said Piccioli. "It’s about the freedom to be exactly who you are.” But if freedom was a place, I would expect more colour and energy. Maybe that’s coming next.