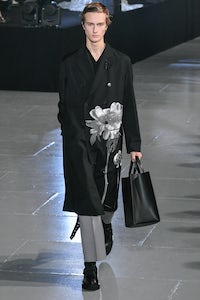 PARIS, France — Pendulums! They’re the leitmotif of the season. That’s fashion for you, swinging between extremes. At Valentino, Pierpaolo Piccioli has been one of the most enthusiastic boosters of streetwear. In fact, he’s occasionally tripped over his enthusiasm. There were times when you wished his men’s collection was a little less targeted at trainer-crazed hypebeasts, especially while his women’s collections were soaring to ever more gorgeous creative heights. But now the menswear pendulum has swung back to a more formal, tailored approach, and Piccioli has found his feet. His new men’s collection achieved a seductive balance of luxe and rigour.

The show opened with severe, monochromatic looks, grandfather coats scarcely softened with stark flower prints by the photographers Inez and Vinoodh. The tailoring was boxy, and every outfit was grounded in chunky lug-soled shoes. I loved the accent colours – fluoro orange and sky blue – because they were so incongruously bright and fresh. There were other incongruities. The artist Melanie Matranga supplied word pieces — WANT, NEED — that were inflated to abstraction across the collection. Unsurprisingly, it was much easier to read GOOD LOVER or BAD LOVER. Think of it as free advertising.

Piccioli was insistent that it’s small details that make the big difference in menswear. He’d slashed collars in the back of jackets to extend the neck. There were zips that opened up the sides of jackets, and, for the show, tiny flowers in the models’ hair, all in service to Piccioli’s concept of “sensitive tailoring.” The idea of wearing a suit to work may no longer be as dominant as it was a few decades ago, but he hopes the growing appetite for formality doesn’t turn back time. “I don’t like the idea of going back, I’d like to see tailoring move forward with a new approach.”

And a big part of that was the ravishing performance by FKA twigs during the show. She performed “Mary Magdalene” swathed in a huge white couture dress that shimmered with sequins. “A woman’s prerogative… she must put herself first,” she sang. “It’s a different way to see the collection,” said Piccioli.

Quite what he meant eluded me, until I remembered what he said earlier about the clothes you might wear to a concert by someone like twigs. “Trainers and hoodie for the job, a jacket for the concert.” Kind of counter-intuitive. “I like to give freedom to people,” he agreed.