Don't Fence Her In

Vera Wang looked to traditional fencing whites — with some help from the artists Alberto Giacometti and Amedeo Modigliani — to inform her Autumn collection. 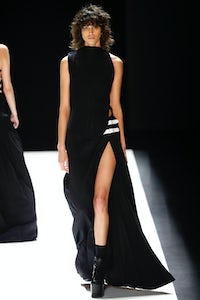 Don't Fence Her In

Vera Wang looked to traditional fencing whites — with some help from the artists Alberto Giacometti and Amedeo Modigliani — to inform her Autumn collection.

NEW YORK, United States — For Vera Wang, Autumn started with fencing. “It’s something that has always intrigued me,” the designer said before her Wednesday show, standing next to a model wearing a tie-back, irregularly shaped vest stitched in stripes down the front. “I don’t know anything about it, but I was very inspired by it.” Floor-length skirts slit to the thigh were strapped together with kilt details, offering freedom and restriction at once. High-neck vests that looked similar to a fencer’s uniform — or "whites," as they’re called — were zipped all the way up the front to maintain the right silhouette.

From there, Wang moved on to the artists Alberto Giacometti and Amedeo Modigliani, who both informed the elongated shapes that were the collection’s calling card. A double-breasted wool blazer in olive drab was so sleek and lengthy that it doubled as a minidress when worn with tiny boxing shorts, lace peeking out from the hems. A series of nude tulle gowns were panelled with strips of sequins to create geometric patterns, while furs were patchworked in a similar fashion.

The designer also drew from Modigliani’s palette to inform the season’s muted shades of mustard, rust and lavender, which is the one colour almost as closely identified with Wang as black and white. There was a certain nonchalance about the tulle racer-back gowns, but overall the eveningwear lacked excitement. (The most compelling thing about the ultra-sheer pieces were the sculptural bra tops worn underneath.) There were other missed moments, like when one of those thigh-baring maxi skirts was decorated with a sheepskin belt that sat on the hips. It added unnecessary bulk to the sleek line Wang was attempting to create.

There were plenty of great blazers, some harnessed at the back between the shoulder blades. In general, though, the pace of the show felt too languid. There was nothing to thrill. While Wang might be best known for soft, darkly pretty gowns, it would have been nice to see even more tailoring, or at least more precision throughout the collection. The energy just wasn't there. 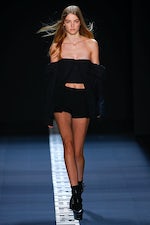