LONDON, United Kingdom — Too much of what has come down the catwalk at London Fashion Week exists in a vacuous echo chamber of image and self-flagellation. It’s becoming exhausting watching glittery firework displays that fizzle out and leave no mark on women’s wardrobes. Canned theatrics can be fashion catnip, but the impulse is short-lived —like fast fashion with luxury price tags.

Fearless expressions of creativity is what the world looks to London for (and look no further than Matty Bovan’s electric charm for that) but what cut through this week was an authoritative voice who speaks directly to their woman.

Roksanda Ilincic, for instance, needn’t look far because she is her woman, as is Simone Rocha and Victoria Beckham. They understand that one needn’t shout the loudest. Ilincic’s confident (and succinctly edited, it should be added) display of intelligent-elegant clothes was testament to that notion. She offered up a delicious sartorial menu with a handful of recipes to follow at home: supple oxblood track pants and anti-puffa puffa coats, trapeze-cut cashmere parkas over prudent skirts, and languid silk dresses in colours that awakened the senses on a thundering Sunday morning. 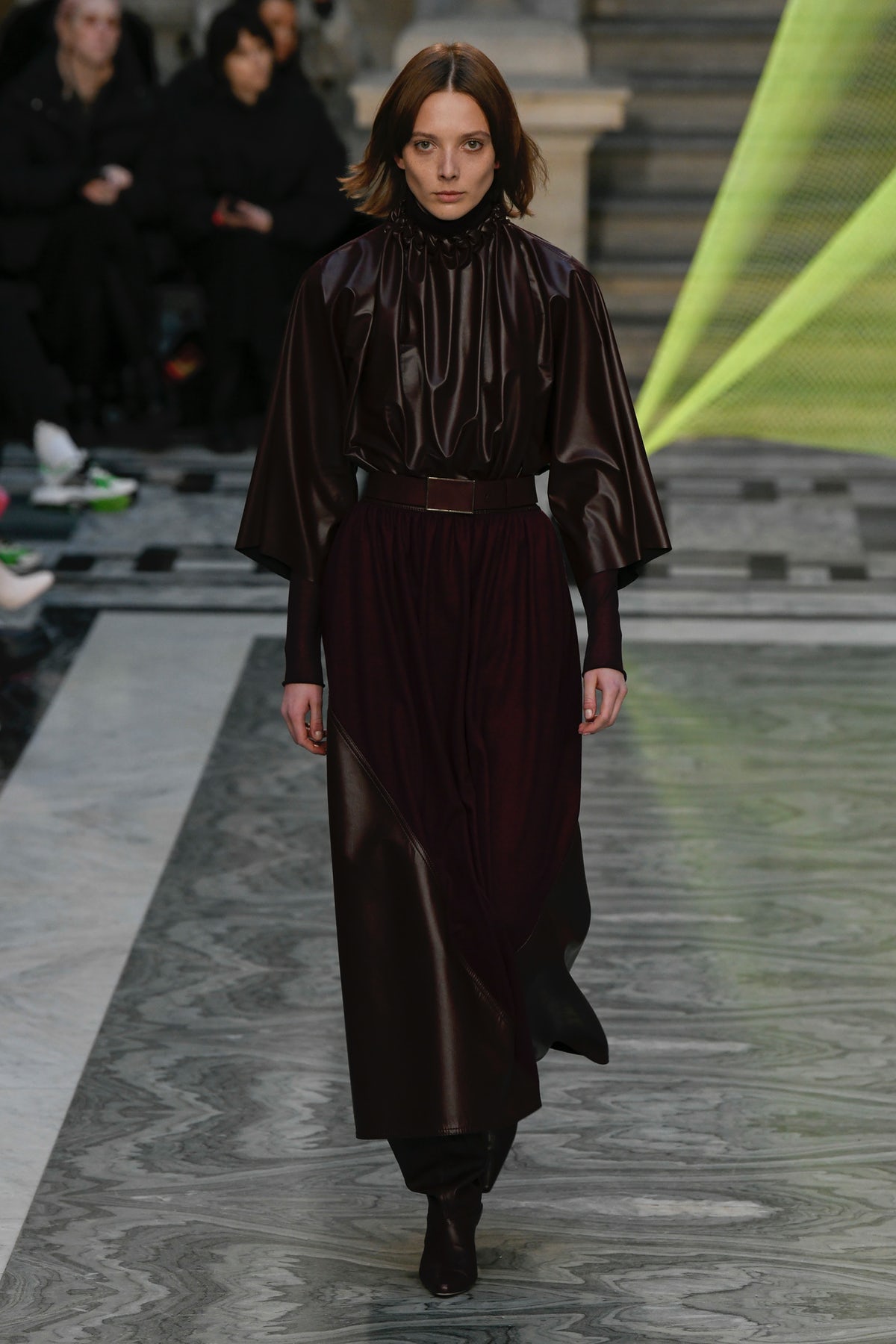 Simone Rocha also staged a convincing wardrobe of layered, ribbon-tied dresses, even if it was mostly iterations on what she’s already known for. The most convincing (and newest) development was the silk tailoring inter-draped with satin sashes and layered over tulle skirts and wide-leg trousers. Sometimes all those ties and silk drapes can look daunting, prompting the thought of added precious time to getting ready in the morning, but they also evoke a romanticism that makes it worth the time and money for her devoted coterie.

Ditto Molly Goddard, whose mille-feuille tulle can be intimidatingly girly for some, comfortingly nostalgic for others. She streamlined her focus this season, distilling her Portobello look into colourful Fair Isle sweaters with crochet flowers, bubbly cardigans and some neat coats that added to her repertoire without having to sacrifice anything, or anyone.

Elsewhere, newcomer Eftychia Karamolegkou offered a complete antidote to pearl-strewn frothiness and Insta-bait exposure. She debuted her beigey-brown lo-fi tailoring, humble knits and razor-slit a-line skirts in a static set-up resembling an airport lounge; real sharp clothes for the discerning woman who means business (or even first class), and who will likely seek solace in the knowledge that they’ll cherish these clothes decades down the line.

There was also plenty of what Cecil Beaton’s generation — the inspiration for Erdem’s artfully eccentric collection — called "S.A." Sex appeal was a central tenet to Christopher Kane’s collection, which zoned in on a concept as simple as a triangle and iterated it in myriad ways, from geometrically-panelled satin coats to isosceles panels of lingerie lace on plissé dresses and white cotton shirting. 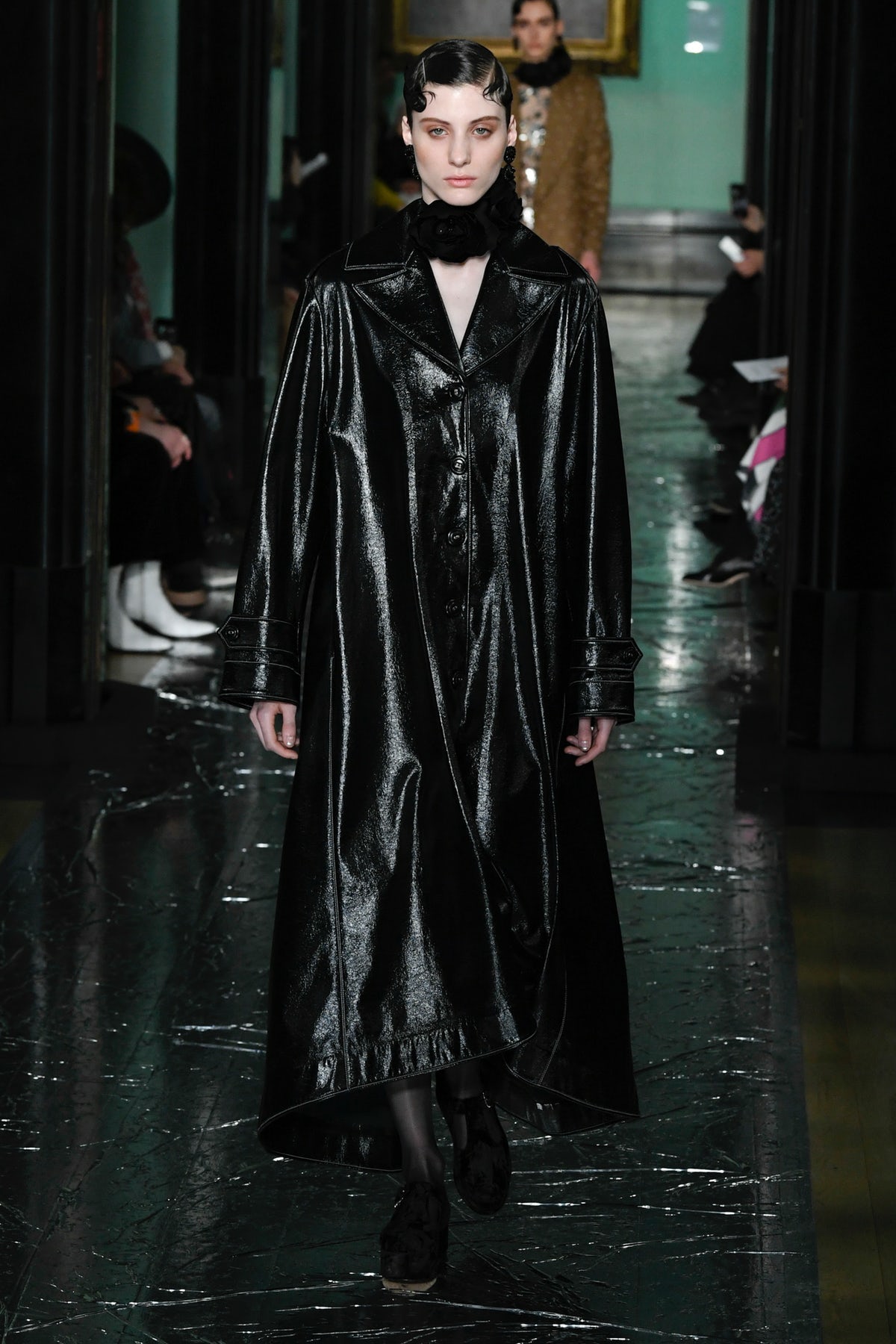 Fashion East alum Charlotte Knowles and her design partner Alexandre Arsenault, on the other hand, riffed on Kardashian-esque over-exposure with Western-style corsetry and body-con slinkiness. Sure, the collection tapped into the current early-aughts revival and put forward great jackets and trousers with hook-and-eye slits, but it was also a throwback to the Size Zero craze of that era. A wider variety of body shapes would showcase their skill and youthful perspective — and avoid narrowing down their woman to just one with a modelling contract. The same goes for Kane.

What are an increasing number of women looking for in 2020? Environmentally conscious clothes that are easy to wear. At a civilised salon appointment at MatchesFashion’s townhouse emporium, Anthony Symonds was holding court, showing his latest Symonds Pearmain collection (the other half of the duo is stylist Max Pearmain). Eighty percent of the collection comes from a deadstock supplier in Britain, the rest is made by local manufacturers — and almost all of it is machine-washable (dry cleaning is toxic for the planet) with detachable leather and shearling cuffs to make the process easier. The pair are both seasoned fashion professionals, so they know what they’re doing.

The most important thing, though, is that the clothes are desirable — clean-lined, well-cut and full of subtle gestures to early ‘80s subculture and, surprisingly, Yves Saint Laurent’s 1976 “Russian” collection. “I was thinking this woman absolutely no longer exists, not just stylistically but as an embodied presence,” Symonds explained. “I don’t recognise that woman energetically anywhere in the world any more. I want to understand who that woman could be — now.” The result was a thoughtful offering for modern women, steeped in the knowledge of yesterday’s. Sometimes it’s the little things, like taking responsibility for the life of clothes once they change hands, that make a world of difference.

Oh, and Hussein Chalayan actually sang at his show. Talk about a performance. His designs have always had art-world kudos, largely because of his deep concepts, but also because he makes cleverly-cut, interesting clothes. This season it was architecturally curved trousers and sculpturally pleated black dresses. However, a lot of his collection was overtly complex, perhaps overshadowed by the concept: something about Aboriginal rituals meeting urban London streets (not the most modern idea in 2020).

It’s interesting to think that Chalayan is of the generation of British designers, like Alexander McQueen, known for the catwalk drama that many are desperate to recreate today. And he certainly put on a show. What that generation of British designers always understood, however, was that there has to be something else on offer, whether it’s collectible accessories or supremely flattering daywear that might appeal to mothers-of-the-bride just as much as fashion junkies. Their shows were all the more brilliant because of that scope, not in spite of it. Jonathan Anderson seems to get that — his show had all the ritzy trimmings and dramatic shapes to inspire the touch of an iPhone camera, but there was also a great selection of desirable coats, flattering LBDs and potentially cultish hairy bovine pumps. Whereas Burberry had breadth — it was more than a hundred looks of disparate ideas and, at times, strangely off-kilter concepts (rugby shirts collaged into dresses with gaping neck holes on the skirts) — that net was perhaps cast too wide. Who was it for? How do these ideas correlate? Where on earth are all these clothes going? Who knows.

Perhaps that’s the takeaway from this week. Clothes shouldn’t be so gruelling to put on, or so demanding of a full look. In the current climate, they certainly shouldn’t seem like a one-time wear, destined for landfill after a night at the ball. Most women don’t dress to be photographed. They dress to feel good, by way of looking like themselves. The designers that offered a helping hand with that, with empathy, consideration and imagination, were the ones whose voices were pitch-perfect.