The Tribe of Versace

Colour and drape united the disparate strands on display — tartan armies, African graphism — and suggested new paths of exploration for the house. 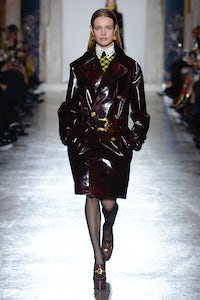 The Tribe of Versace

Colour and drape united the disparate strands on display — tartan armies, African graphism — and suggested new paths of exploration for the house.

MILAN, Italy — What was she going to do after last season? I mean, really. How do you top triumph? Donatella Versace managed a very skillful sidestep. Fashion is tribal. Gianni knew that with all his signifiers, the Warhol, the bondage, the Miami silks. Donatella chose a more primal tribalism. Clans. As in tartan armies. Colour, pattern, texture, ardent allegiance. There was something utterly exhilarating about the mix. It kind of said fashion at a very basic pleasurable level. As basic as a fringed football scarf draped over Mica Arganaraz’s tartan twosome, or the plaid mohair jacket tightly belted over a stretchy pencil skirt.

When the show stopped being about tartan, it started being about other kinds of tribalism: an African graphism in checkerboard yellow patterns, a severe monochrome for urban tailoring, a Vorticist bricolage for the finale.

What united all these disparate strands was colour and drape. The explosive exuberance of multi-coloured pouf skirts was so much more appealing than the taming restriction of corsets and belts. But Donatella wanted that friction. It was something different for Versace, the once and future house on the same catwalk. More importantly, it suggested new paths to explore.