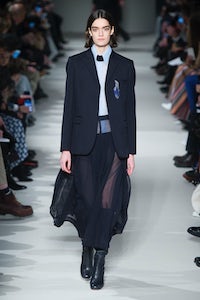 NEW YORK, United States — When a designer invokes a “real” woman, it often comes across as one of those vaporous fashionisms that doesn’t really bear scrutiny. When is a woman not “real?" When she’s Evan Rachel Wood in "Westworld?" There did, however, seem to be a consensus from women (all of them real) after Victoria Beckham’s show on Sunday morning that the reality she embraced in her show notes defined the life of someone who was raising a family, holding down a job, and not feeling particularly satisfied by the way the fashion industry was addressing her professional needs.

Beckham to the rescue! She insisted she was tired of the word “empowerment," but it was a pretty accurate shorthand for the kind of career dressing she was offering: the precise structure of scaled-up coats and double-breasted jackets, softened by the flou of chiffon skirts or the floppy capaciousness of oversized trousers.

A simple formula, but unfailingly effective, acknowledging strength, sensuality and a subtle hint of please-yourself subversion. Hey, it worked for Katharine Hepburn, who hovered here and there as a presiding spirit. That was one reason the collection felt touched by the 1940s. The other was its patterns and colours, inspired, said Beckham, by an exhibition at Tate Britain of the work of Paul Nash, whose most famous paintings were made during WWII.

Once upon a time, Beckham, slight, shy-ish and shoe-horned into a bodycon dress, rolled in the slipstream of fashion’s other favourite Hepburn, but here, in her navy rollneck and big slouchy pants, she looked as comfortable in her own skin as Kate the Great. And that spoke volumes about how far Beckham has come, both professionally and personally. She herself nailed one clear stylistic evolution. Her silhouette now flows and flatters, conscious of the body, rather than body-conscious. The strength is in confident attitude, rather than hyper-seamed sexiness. And maybe, in the end, that is what any woman can aspire to as “real."