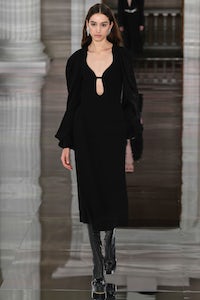 LONDON, United Kingdom — Get the swear jar, Harper, Mummy’s got four-letter words on her soundtrack.

She pre-warned her daughter about "the very bad word", but Victoria Beckham couldn’t resist Little Simz’s “Boss” with the line “I’m a boss in a fucking dress”. She said it made her laugh but, more important, it also reflected the attitude of her new collection. A gentle rebellion, she called it. “Losing my inhibitions a little.”

To the untrained eye, the collection still looked fiercely controlled, like it could do with a little goosing, but in the continuum of Beckham’s career, it was clearer what she meant. She was rebelling a little against her own codes, last season’s colour and volume surrendering to this season’s structured silhouettes and an all-black opener, which included severely sensual dresses clasped at the waist by silver claws.

Severity was a keynote. Beckham said she’d been looking at free spirits from other eras and she was particularly struck by 60s proto-supermodel Penelope Tree, whose stark look was a re-vision of fashion convention. Beckham’s shirt-sweater-and-tweed-skirt sets, or culotte suits, or matching coat and kick pleat combination might have been solidly bourgeois, but every outfit was paired with platform stocking boots. The contrast loaned a transgressive tickle, a suggestion of a lost inhibition, a whisper of Belle de Jour. It wasn’t so much to be going on with, but it did feel like there’ll be much more to come as Beckham lets herself go.

“I’m always inspired by art, whatever it may be,” she said. Her latest location was the 17th-century Banqueting House on Whitehall. The floor was mirrored for the show. It reflected a ceiling high above us, covered with nine paintings by Peter Paul Rubens. Beckham was referring to her clothes when she talked about “finding ways to surprise and elevate each season”, but Rubens did a lot of the additional heavy lifting for her this time around.