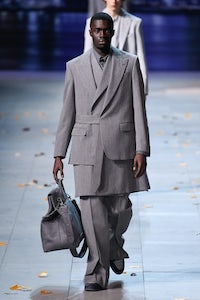 PARIS, France — Virgil Abloh is very good at taking a long view. He’s a believer that slow and steady wins the race. “Do something for a long time and there’s a gravity in your next slow move,” he was saying in the Louis Vuitton studio on Wednesday. “I do everything on a parallel track, slow and steady, and watch the work amass.”

So here’s what’s going to happen next, according to Virgil: “My tenure at Louis Vuitton is going to be a study of the different phases that make a man.” He claimed he had a Eureka moment after his Vuitton debut when he realized the show was about boyhood. Maybe "The Wizard of Oz" is a parable about adolescence. Seasons change. Abloh’s second collection (he called it Part 2) upgrades The Wizard to The Wiz. “Quincy Jones produced, it was the end of the Blaxploitation era, it had Diana Ross, and Michael Jackson playing the Scarecrow…”

Ah yes, MJ. Abloh insisted he had The Wiz in mind before he even got to Michael. Nevertheless, in his Vuitton voyage through the Seven Ages of Man, what more provocative focus could he choose than the manchild who changed the world? “The ultimate muse,” Abloh called him. “We watched him grow, but he stayed a boy the whole time.” In his elaborate show notes (a very good read, I must say) he talked about Jackson’s extraordinary power, “every jacket, glove, sock and hat fashioned into an instrument of awe." What fashion designer wouldn’t sell their soul to Satan for that power?

But Abloh is a diligent student. “There hasn’t been calculation in my work for a while,” he insisted, but his second presentation for Louis Vuitton was a carefully considered powerhouse, building layer upon layer with the kind of shameless manipulation that characterizes the greatest showmen (best-selling album of the year, by the way). The set mirrored MJ’s Billie Jean backdrop and, at show’s end, Dev Hynes strolled the street of illuminated flagstones, wrenching at his guitar. A young dancer, top to toe in purple, leapt and tumbled down the same street, paused, looked skywards for a moment, then ran on, boy in the grip of a dream. The live band played “Wanna Be Startin’ Somethin.’”

Alboh dreams too. The extravagant craftsmanship of the Vuitton workshops allowed him to elevate the ordinary, just like MJ with his gloves and socks. A plaid shirt sprinkled with crystals? “Raindrops,” Abloh called them. More crystals, a Milky Way of them, extravagantly crusted a showpiece blouson. The Vuitton monogram was artfully debossed on a cashmere twill puffa. Maybe it was the Ancient Egyptian pleated shendyt worn by MJ in the “Remember the Time” video that inspired the long, flowing pleated skirts. It was definitely “We Are The World” that inspired the flag collages in intarsia-ed leather and the houndstooth pattern that was actually a million little continents of Africa (the song’s lyrics were printed on a shirt).

The enthusiastic creativity of these touches truly illuminated the collection, though you could easily get the feeling that Abloh’s heart was elsewhere. “I may be the streetwear guy, quote-unquote, but tailoring is the story I want to tell,” he claimed. “I want to get my young audience out of sneaker world.” Not at Vuitton’s prices, baby. Still, there are many less noble aspirations in the world. And the yellow brick road has always led to the most aspirational destination of all in American mythology. MJ danced and sang his way to Oz. VA is taking the fashion route.