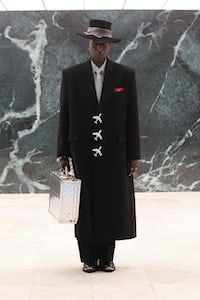 Virgil Abloh launched himself at Louis Vuitton six collections ago with the image of a Black baby boy, maybe his way of emphasizing that he was going to grow into his new job. “Right now we’re at a solid age 4 or 5,” he said while we were talking on Wednesday about “Peculiar Contrast, Perfect Light”, the film he presented for LV Autumn/Winter 2021.

It was spectacularly adult, physically and philosophically, yet it was that little boy’s innocent vision which Abloh had in mind: innocent of stereotyping, innocent of bigotry, innocent of the way life is routinely twisted to elevate some, deprive others. Abloh felt it’s his responsibility to shine that light. The film faded into darkness with Yasiin Bey (better known as the rapper Mos Def) intoning a single word, “Miracles…”

Bey, fellow rapper Saul Williams and British poet and trans activist Kai-Isaiah Jamal were just three of a cast of stellar contributors who helped realise Abloh’s own vision. As infused as it was by the calling to account that has been unleashed over the past year, he insisted it wasn’t a political collection. “There are people who do that work already and I choose to support them. To me, this is an artistic collection. It’s about fashion, art and creativity.” We were speaking at more or less the exact moment of Joe Biden’s inauguration. “What minorities are asking for is representation,” Abloh said. “The fashion industry has been called to action to represent a more diverse epicentre in image and practice. What does a collection look like when it embraces other cultures?” His offered an answer: the kente cloth his parents wore twinned with classic tartan.

The key juxtaposition of the collection was something that Abloh defined as Tourist vs. Purist, a fancy way of saying outsider vs. insider. “I’m trying to make space for them to interact,” he said. “My career has been built in plain sight from that very metamorphosis.” Which means there will always be a lot of his own story in whatever he shows. Maybe that was clearer this time. The politics were personal. Abloh referred to “the changing ecosystem of fashion, where Supreme sells for $2 billion”, and how new doors were opening, how a younger generation of designers was drawing on the world in a whole new way. “I represent a minority among designers, so it’s my responsibility to open those doors.” One step: he has founded the Post-Modern Scholarship, which has raised $1 million for the education of Black students in the US. “My focus is education, to fix the gap by allowing the door to be open at an early age.” But Abloh was also thinking of that army of kids he mobilises every time he shows or drops something. “At one point, I was that kid.”

You could find his own touchstones here. The set was based on the pavilion Mies van der Rohe designed for Germany for the 1929 International Exposition in Barcelona. It was intended as an abstract cityscape, populated by a diverse crowd of Vuitton neo-(not stereo-)types. “I wanted to make a melting pot, a way forward for harmony,” said Abloh. Mies is one of his idols, the designer of the campus where he studied architecture at the Illinois Institute of Technology. The marble and travertine of the Barcelona Pavilion were reproduced in some of the jacquards in the tailoring. An essay by James Baldwin, another idol, provided the conceptual core of the collection. In 1953, Baldwin wrote about his experience as a Black man moving from America to a village in the Swiss Alps, and what it was like being a Black artist in the birthplace of European art. “That text really struck me during 2020,” said Abloh. “Systemic hierarchies, living under constant pressure…a reminder of why 2020 brought up such an uprising around the world.”

If I sensed a reflectiveness in Abloh’s demeanour, that may have had something to do with the fact that, in 2019, he basically ran himself into the ground. Things got hairy healthwise. “It was the first time I thought about legacy,” he admitted. “I took time off. I was able to revisit things, listen to things.” His pace slowed. He brooded on the job he’d taken on. “It’s different if you’re niche, the audience gets the nuance,” he said. “But operating on a larger scale, you have to choose your message wisely.” Nuance is his thing, he added.

Maybe that wasn’t immediately obvious in the extravagant fandango of fashion in Abloh’s film, but take a step back and it was the subtle coherence of all the components (particularly the choreography) that made this easily his most impressive achievement since he signed on at LV — or maybe since he first came to fashion. It was he who corralled all the contributors: creative director Josh Johnson, musical director Asma Maroof, movement director Tosh Basco, dramaturgist Kandis Williams. Even the clothes themselves, often the Achilles heel in the complex edifices Abloh builds around his presentations, had a winning consistency this time. For that, Abloh tipped his cap to London überstylist Ibrahim Kamara, who has pioneered a heroic new masculinity in his editorial work (and who also works wonders with headgear). It carried across into the show casting. “It’s like ruining a great Renaissance painting to rein Ib in,” said Abloh. “This is the first time the clothes were designed first, and we put the collection together afterwards.” In other words, it made proper sense.

“I rarely feel like anything I make crosses a threshold,” Abloh added. “But I’m getting chills from this film. The collection is a performance art piece, with the choreography and the storyline. I hope this could tour the world so that people could see it later.” Now that might pass for the innocently enthusiastic musings of a 5-year-old in a 40-year old’s body, but in Abloh’s eyes it’s all part of “a real embracing of who I am, my future.” Just wait till the Vuitton baby turns 6! 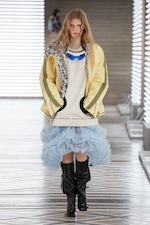 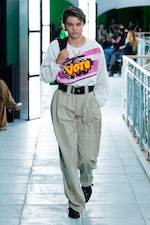 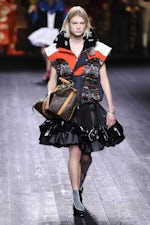 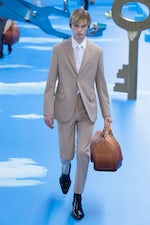