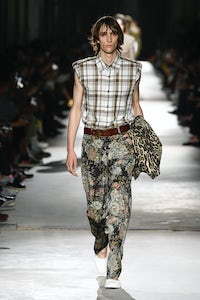 PARIS, France — To hell with the glass of fashion, Dries Van Noten said with his new men’s collection. We want to reject reality, not reflect it. He sounded almost giddy as he called for the triumph of instinct over reason. He offered what he acknowledged was “an unreasonable mix” – a furious mash-up, a visual overload – to propel his masterplan.

Soldier, sailor, hustler, slut, gambler, pimp, John, Mr Businessman, master of kink…no wonder Van Noten’s spirit guide for the collection seemed to be the German director Rainer Werner Fassbinder who made a personal and professional habit of celebrating all possible transgressions before dying of a cocaine and barbiturate overdose in 1982 at the age of 37.

The lurid sexual farrago of Fassbinder’s “Querelle” seeped into the show, which was staged in an endless narrow tunnel to a soundtrack by longtime Dries collaborators Soulwax. It featured a steadily intensifying swirl of sound that finally, gloriously resolved itself into “Funkytown,” the Lipps Inc chart sensation that scored many a night of amyl-fuelled disco oblivion in the early 80s. The tune still makes pulses race, which was just what Dr Dries ordered.

The sartorial equivalent of that aural orgy was a wardrobe made up of LEWKS! A camo trench coat lined with a bright yellow silk peignoir. A broad-shouldered leopard-print blouson, silken floral boxers and bike boots. A double-breasted pinstripe jacket paired with nylon chaps. Linebacker jean jacket, leather hotpants. By now, you should have the anything-goes picture. But Van Noten is much too canny to pitch his cap wholeheartedly into the seventh circle of excess. The show did sustain a sort of balance between the relatively conventional (broad-shouldered, nipped-waist tailoring — extreme, yes, but in the circumstances...) and the feverishly clashing, even if they ended up in the same outfit at times. And if you stepped back for a second, took a deep breath (put the poppers down, Muriel!) and mulled, you could see the typical Dries panoply of items, something old, something new, something brocade, something blue. There was a method in the madness.

But, in embracing an icon of queer culture like Fassbinder, (as well as queer classic “Pink Narcissus” and queer legend Kenneth Anger, also cited in the shownotes), Van Noten could equally be signalling his own need to destroy whatever cage he thinks the world has made for him. On the soundtrack, a female voice intoned lines from Oscar Wilde’s “Ballad of Reading Gaol”: “Each man kills the thing he loves, yet each man does not die.” In “Querelle,” Fassbinder had Jeanne Moreau croak those words. A glamorous grotesque. It’s not a state in which I ever imagined I’d find Dries Van Noten, but I’m actually enthralled by this development. The future looks curiouser and curiouser.