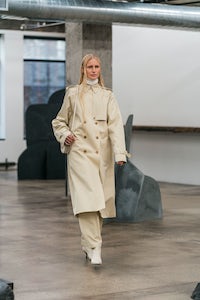 NEW YORK, United States — The Row designers Ashley and Mary Kate Olsen rarely provide show notes or in-depth collection interviews, so the booklet handed out at the beginning of this morning’s show — composed by Dakin Hart, a curator at the Isamu Noguchi Foundation and Garden Museum in Queens — was quite revealing. If not about the collection itself, which was presented amongst Noguchi sculptures, but about the designers’ overall philosophy. “The Row’s principles' scorn for the balkanisation of creativity into narrow silos mirrors Noguchi’s own,” Hart wrote. “Their passion for Noguchi, which stems from the indivisible interests in art and design, have put them in the vanguard of a virtual tidal wave of interest in the fashion world.”

It’s true. What The Row ultimately shares with Noguchi is the confidence that a sound idea is eternally relevant. Consider the artist’s famous triangle coffee table, which has spurred ire — including a trolly website, Fuckyournoguchicoffeetable.tumblr.com — yet remains unflinchingly beloved. In the realm of fashion, The Row has stood resolutely minimalist even as they have moved further and further toward the decoration.

Today, amongst the galvanised steel and cast iron structures, they showed head-to-toe black suiting — one look accented with a slim leather brown belt — plush cashmere to-the-floor coats with jumbo shawl collars or cummerbunds, single-pleated trousers paired with sharply pointed boots, all in a colour palette that gradiated from cream to oatmeal to sage to chocolate to grey to black. The waist was often dropped, although there were some bar-like blazers and fulsome ball-gown skirts that offered structure. These were sumptuous, stunning clothes, the kind of thing that makes “wardrobe dressing” feel more like an aspiration and less like a marketing concept.