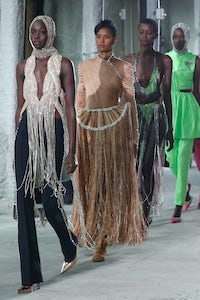 NEW YORK, United States — What New York designers lack in design ideas, they often make up for in practical ingenuity.

Susan Korn, a young accessories designer who makes plastic-beaded handbags intarsia-ed with strawberries, martinis and rainbows under the moniker Susan Alexandra, is Generation Z’s Judith Leiber: kook, without the crazy price tag. (While a crystalised French fry clutch from the late designer’s current line is on sale at Neiman Marcus for nearly $5,700, Korn’s fruit salad bucket bag is just $525 on her own website.)

You can buy Susan Alexandra bags at Saks Fifth Avenue and other places like it. You used to be able to buy them at Opening Ceremony, but no longer. Korn seems to be betting, as more and more of the stores she once sold to have closed, that opening her own shop is the way forward. 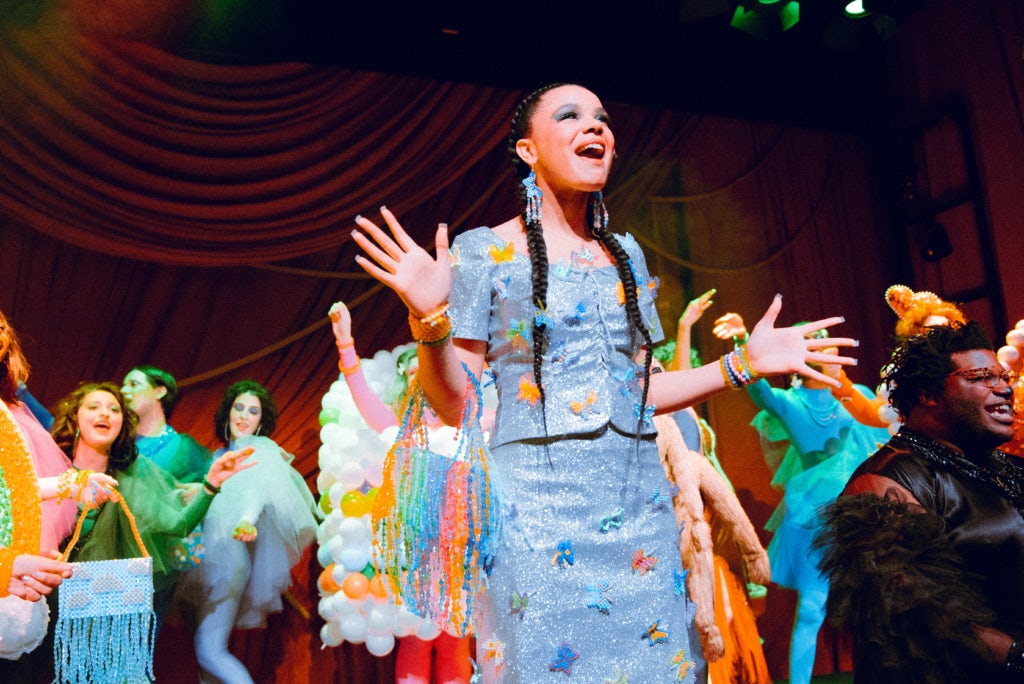 She’s so excited about it that on Saturday, Korn staged a musical-as-fashion-show depicting an imaginary journey to 203 Prince Street in SoHo, her dream store location. “Everything is closing here, from Barneys to freaking Payless,” belted one of the stars, who were crammed onto the stage underground at the Public Hotel on the Lower East Side. But like any good musical, Korn’s character, dressed in silver sequins and played by the exceptionally talented Aisha Kerensa, perseveres, saying “screw it” to the reality and following her heart instead.

Korn’s tchotchke-fuelled business is scalable, and she may indeed be able to live out her fantasy, unlike many of the young designers operating within the New York fashion system that can barely afford to operate their own e-commerce. What are they supposed to do when their stockists disappear?

Lauren Rodriguez, the designer behind four-year-old Chinatown brand Lorod, which sells quilted work jackets and top-stitched bowling shirts, rattled off a list of stores she used to work with that are no longer: Opening Ceremony, The Line, Shop Super Street…the list went on. She’s not in a position to open her own store, but Lorod has started inviting her mailing list up to her studio the first Friday of every month. (This past week, she had an astrologer on hand.) It gives clients an opportunity to try stuff on — she has lots of sizes on hand — and get a feel for what she’s trying to be. “I myself am mostly buying vintage aside from the stuff we’re making,” she said.

Erin Beatty, who’s been through the slog before with her line Suno, which closed in 2016, is using her own experiences in the secondhand clothing economy to build her new line Rentrayage, which is made entirely out of vintage and deadstock fabric. (Vintage pieces are one-of-a-kind, deadstock can be bought in multiples.) Beatty has an exceptional commercial eye and a good sense of what wears well on the body: she has had no trouble finding retailers (like The Webster and Ikram) to buy into her idea of piece-together denim jackets, re-imagined men’s shirting and Little Women pleated tartans. At her presentation on Saturday, shown in a romantic townhouse in the West Village, she spoke with a practical air about a business that is anything but practical. Gone from her repertoire is talk of designing into concepts or themes: instead, she’s simply designing what she believes in. (Which, along with clothes, includes a home collection anchored by vintage textiles.)

“We have to approach the world lovingly. I know that sounds totally cheesy, but work with people you love, figure out how to try new things, don’t see doors as closed,” she said. “I, too, am terrified by everything I see. But the only way to fix it is to look at what you’re doing and try to create authenticity and hope that’s what will make the change.”

The young designer trio of Vaquera has matured significantly since the meme-making days of its Tiffany & Co. parody, transforming its psycho-cheerleader character into a real person. A week ago, they had no plans to show at New York Fashion Week because they couldn’t afford it. (The label has been self-financed from the beginning.) But their publicist Justin Padgett at DLX wanted to make something happen, scheming with the team at Dover Street Market, which stocks the brand, to host an impromptu show where a select few were actually invited but all were welcome. 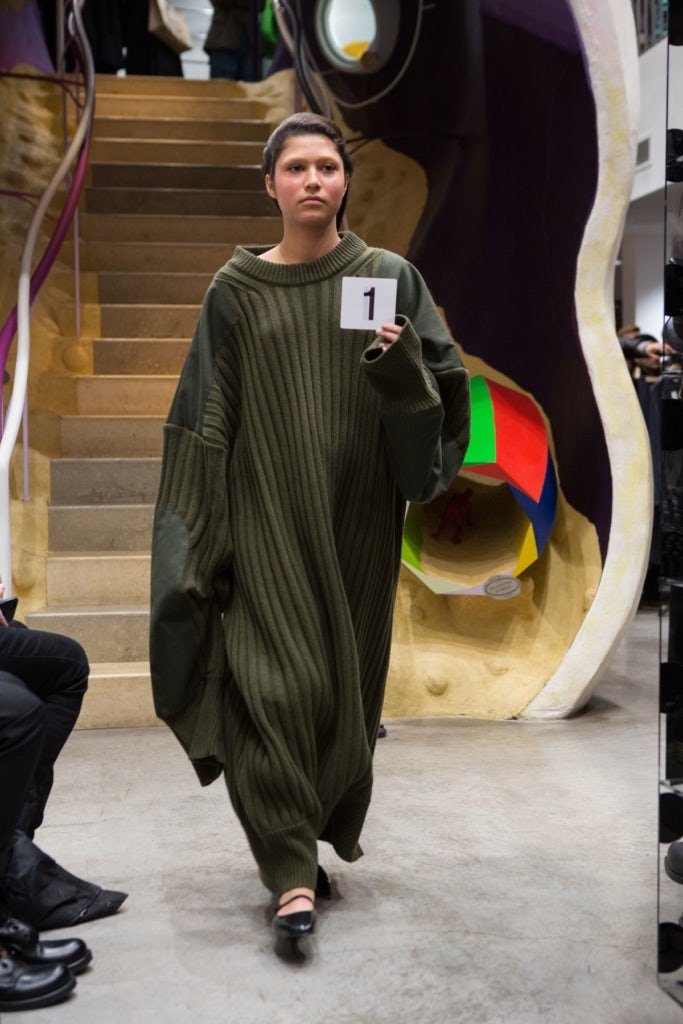 “We do feel a little bit stranded financially,” co-designer Patric Dicaprio said. “We’re trying, but the three of us are not business people. It’s so good to have support from Dover Street.”

On Saturday, they did a very grown-up thing, showing a crisp collection of 18 looks. (Economical, but also refreshing.) The models wove casually through the narrow store space, each holding up a number card the style of an old-fashioned couture salon, wearing looks that were very much, well, wearable. Gone is the fatuous, messy feeling: the look of their shirt dresses and corset tops is more precise, without losing the manic energy that got people interested in Vaquera in the first place. “I think that season really was more about the clothes than it’s ever been,” said Claire Sullivan, who, along with Bryn Taubensee, rounds out the group.

Area’s Piotrek Panszczyk and Beckett Fogg provided a much-needed sparkle of hope over the weekend, with their rhinestone-trimmed suiting, lampshade hips and stripper-chair earrings dangling from the models’ lobes. The collection, shown in the still-raw space that will be part of the Africa Center when finished, was more polished and fully formed than anything else I saw. I remember visiting Panszczyk and Fogg at their Canal Street studio when they were first starting out, and the ideas they had then are still present…albeit further developed and expanded. With their stringy sculpted silhouettes that recalled Madame Grès’ pleating, or flaps of herringbone tweed jutting out from coat collars, these are not club-kid clothes, these are club-sophisticate clothes. (“Highly conceptual, but also super-desirable and feminine,” as Panszczyk put it.) 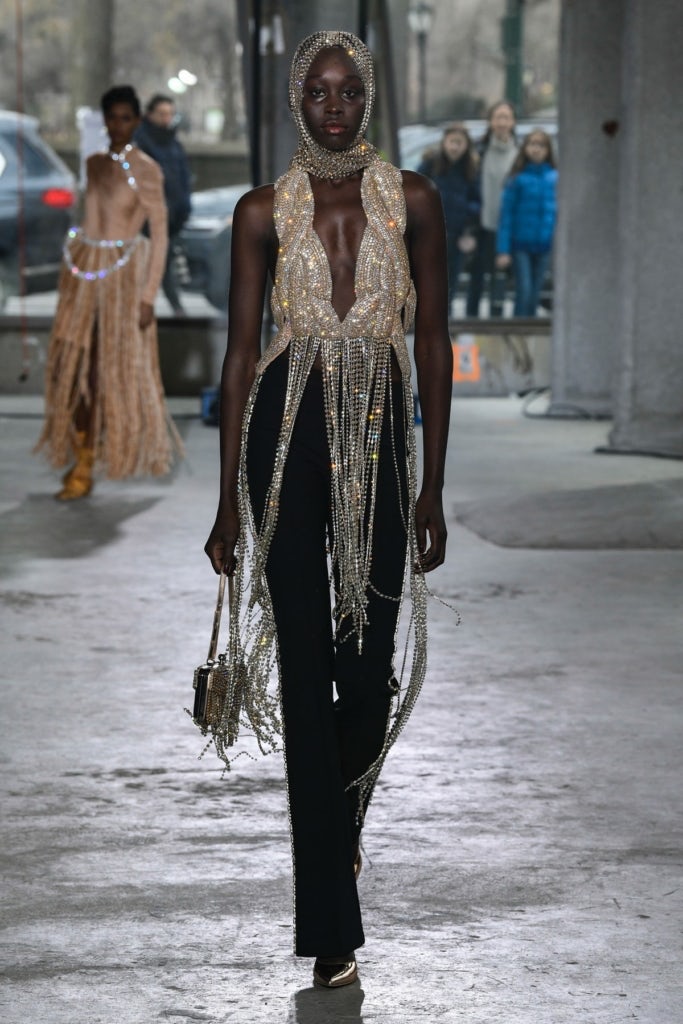 Panszczyk and Fogg are dedicated: they want Area to be about craft, and look like they are putting in the work to live up to that mission. But what happens when a big retailer like Barneys — a significant client of Area’s — shutters? The duo said they are careful about not relying too much on one store, and that their direct-to-consumer business is “skyrocketing.”

“We know what our customer wants to buy,” Fogg said. “A lot of times, the retailers are not necessarily ready to offer that.”

Sies Marjan launched at Barneys in 2016, and has been a staple brand there since. But at his runway show on Sunday afternoon, high up in a midtown skyscraper with floor-to-ceiling views, designer Sander Lak was being sensible.

“When it comes to your products, you can find a way to replace something that disappears. When it comes to a certain kind of vibe or emotional connection to our first retail partner, that’s a very sad thing, and it’s something that I hope doesn’t happen any more,” he said. “This is the time that everyone needs to figure out what works for them, and that’s what we have been doing from day one.”

Of course, it helps that Lak has the backing of billionaires Nancy and Howard Marks, who from the beginning have committed to building a luxury brand in a slow and methodical way, without the urgency of a startup that needs to scale fast. This season, the label is one of the sponsors of the upcoming “Countryside, the Future,” a Rem Koolhaas exhibit at the Guggenheim. A baller move, something the likes of LVMH would do, exposing Sies Marjan to museum-goers, and Upper East Siders, a target audience for any aspiring luxury brand. 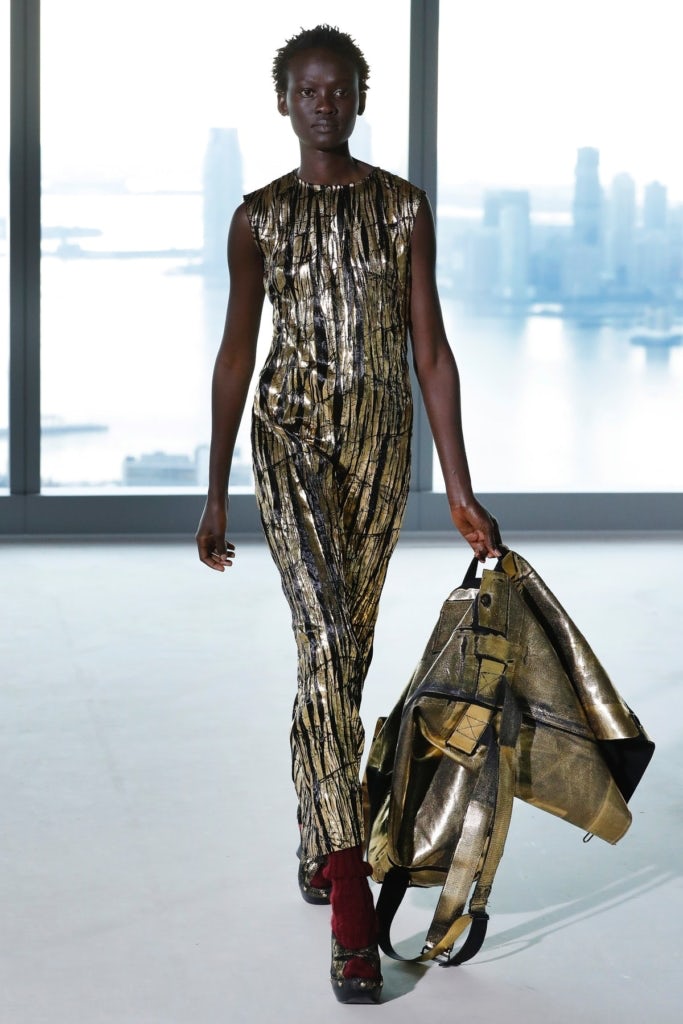 While Lak typically does not work in themes, the show’s focus — a research project looking at the past, present or future of all things pastoral — allowed him to approach this collection differently, from the way he built his colour card to fabric development. The most striking result, a collaboration with Dutch artist Claudy Jongstra, was a scratchy felt wool that sort of unfurled into a moss on long vests and army packs.

Worn with traditional Dutch clogs — a coarse ode to the designer’s own background and that of his new collaborators — Lak’s latest effort was beautifully composed, building on the ideas he has introduced in past collections (in particular, his way with plackets and nuanced sense of colour) without the dreaded staticity. The fact that he had a year to think it through with Koolhaas and his team, rather than the typical few months, showed the value of taking time.

To be sure, the playing field is not even. Some brands have more money than others, and funding is crucial when a brand is trying to scale. It’s unfair. But while there’s plenty of perseverance in New York's young designer scene, the lack of ideas remains disappointing, regardless of how much financial support is available.

Nothing this weekend, except perhaps for Beatty’s business concept, felt like it was moving fashion forward. Recent CFDA/Vogue Fashion Fund winner Christopher John Rogers, whose joie de vivre is felt in every inch of his crinoline layers, isn’t presenting anything new. (He also needs to learn the concept of restraint; not necessarily in the actual clothes, but in the number of looks he sends down the runway.) I am rooting for him, but we need to see if there’s anything under the shimmering puffs of silk shantung. 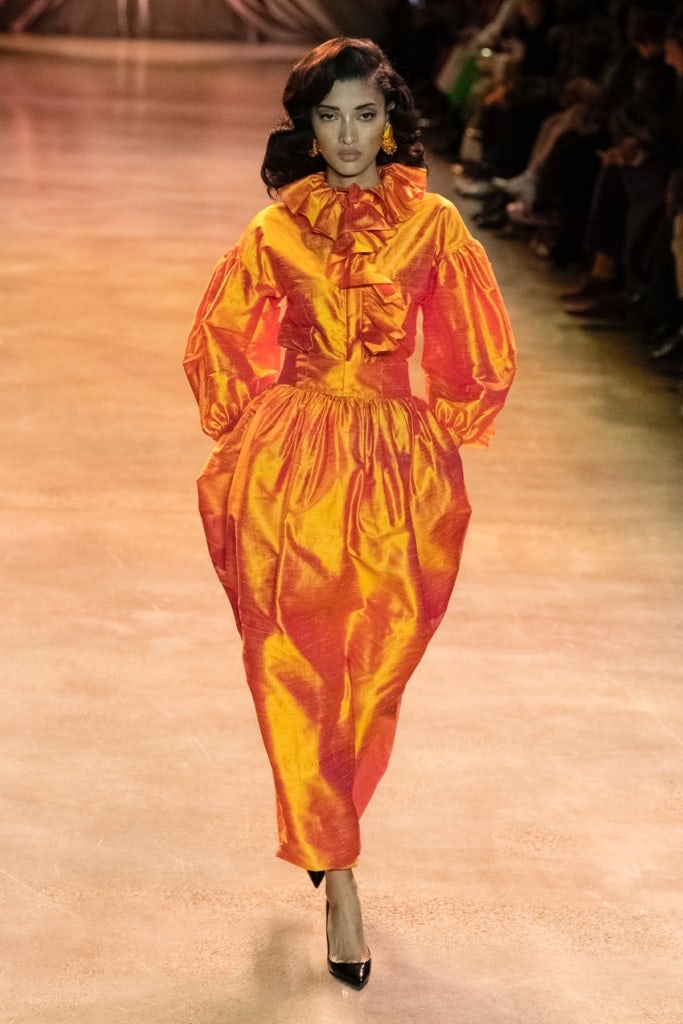 The most notable thing about fleece jacket-master Sandy Liang’s latest collection, staged in Stuyvesant High School, was a chihuahua tucked under the arm of one of the models. Liang has a knack for creative commerciality, but this string of dressing gowns and pajama sets for the street lacked expression and a sense of fun. 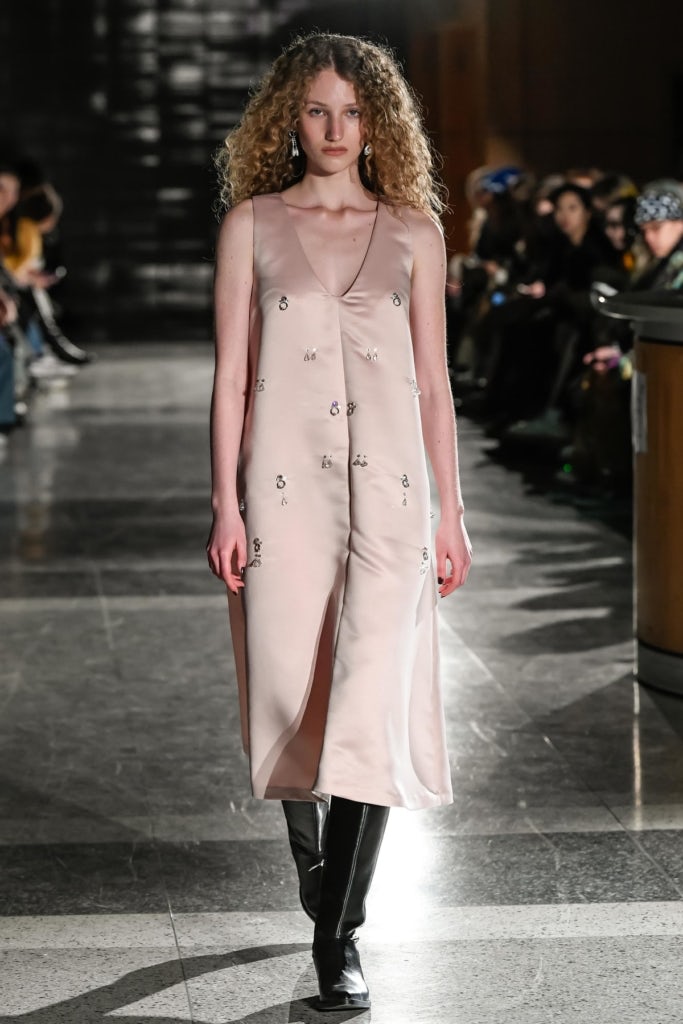 It’s wild to see how many young American designers are so influenced by the likes of Marine Serre. The idea that you can be more creative in Europe and that it’s part of the culture there, is not totally unfounded. But it’s also sort of silly. Area could handle going up against their peers in Paris.

“Everyone is talking shit about New York…We think about it, but we see ourselves like a singular entity,” Panszczyk said. “We don’t really care what is up on the calendar.”

More New York designers need to hold themselves up to that standard.