MILAN, Italy —  Is there an Italian identity in fashion, and does it still matter?

The question was looming large over the Milan fashion week that closed Monday. The schedule, reduced to a mere three days with not that many appointments to fill each one, is slimming down to the point of starvation. This season the goings got even worse due to the absence of Prada, which showed una tantum earlier in the month in Shanghai.

Such a loss was certainly noteworthy, and very bad in terms of gravitational pull towards the city. But truth be told, Italy cannot exclusively count on established labels in order to keep afloat. There is a lot going on in the city fashion-wise, and in general in the creative and cultural fields. A place like Spazio Maiocchi, curated by the painfully cool and au courant team of Kaleidoscope — a free-form, borderless arts magazine — is dishing out one catchy project after another. One includes the Harmony Korine exhibition that opened on Sunday at the peak of a four days Korine film festival organized by Gucci in the Gucci Hub, another place that's worth mentioning for spicing up the local cultural life.

But it seems like very little of this ferment is reaching over to the international fashion community, which comes to the city for its big wigs, their hopefully still-lavish advertising budgets and little else. Italy nowadays is deemed a place of excellent product and very little fashion-forward innovation, and even less as a hub for new talent. Which is correct, but only up to a point.

It's certainly true that Milan is lacking a proper strategy when it comes to marketing its newcomers. But it is also true that finding a balance between the material and the immaterial is vital, if not at all easy.

Which brings us back to the Italian-identity dilemma. Because if Italy is not just about the best product out there, it is still very far from finding the right tone of voice in how to promote the local flair.

Camera della Moda, Italian fashion's governing body, seems to believe, with a certain ingenuity and indeed a lot of enthusiasm, that video is the way forward. There was quite an emphasis on Flash Forward, the two-day exhibition at the beginning of fashion week that took place in Triennale, the very serious, very respectable museum devoted mainly to design. There, the young curator Giangi Giordano called upon a set of young labels to use video as a way of communicating their aesthetic and attitudes.

Video is, without a doubt, a medium that speaks clearly and loudly to a hyper-visual public. As a narrative tool, however, video can also be deceitful. Innovation in clothing design cannot just be an attitude, or a varnish of styling. It needs to be steeped down in the way things are made, in the design and in the construction. Otherwise, it's just a trick. Apropos, the two labels that had the best videos, United Standard and Magliano, came out quite disappointing on the catwalk.

Luca Magliano, a wonderfully lively thinker and talker who is obsessed with the libertine and Dionysian spirit of the Eighties, was after a certain pagan messiness. But for all the askew buttoning and the tailoring with a bad boy swagger, the collection looked a little bit too clean, a little too sanitised. The guy has an energy and a talent that can bring him a long way, but somehow one hopes that he could set it all free and let go. The Eighties, after all, were all about letting go, to the extreme consequences if needed.

Giorgio Di Salvo, the art director and graphic designer behind United Standard, is a shy techno geek. This was the second official showing for the label, which is rooted in his interest in urban environments and hi-tech fabrications. While the debut, all gloomy angst and edgy drama, was not exactly convincing — an ode to streetwear a season too late — this new collection marked a visible step forward. It was clean and considered, almost basic, in fact. Too clean and basic, honestly. While the videos Di Salvo creates show a chaotic, magmatic world, the same elan does not translate into the fashions he envisions, which feel a little cold.

Of the whole crop of newcomers, it's probably Dorian Tarantini, the mastermind behind M1992, who best balances good communication with proper fashion design. A well-known underground DJ and all around nightlife agitator, Tarantini, like his peers, is obsessed with the Eighties. (It must be a generational thing: a longing for a utopic time of total abandon; the last before the rise of digital control.) For him, it's London's music-and-style subcultures. Yet, he is not at all literal. This season, for instance, Tarantini worked on a mixture of yuppie and teddy boy. It was a well-delivered punch, suggesting the good-old necktie as the ace of rebellion.

M1992 was also included in the Fast Forward video exhibition, while Sunnei, the most established label to have emerged in Italy over the last five years, was not. It makes perfect sense: Loris Messina and Simone Rizzo, the lively and fiercely determined kids behind this growing project, have always and wisely worked on the shapes and the product first, which are whimsical and very immediate. The rest, including the art and cultural projects, is just consequence. Sunnei is no digital-hype label.

The show this season took place in the outskirts of Milano, under a stretch of the freeway completely painted white and christened "Bianco Sunnei," which will serve as an open-air gallery and poli-functional space. The collection, all roomy forms and intelligent playfulness, was the duo's best, and came with a persistent flavour of old school Marni — a fashion vision that is still dearly missed.

In such a strange Milanese season, it was mandatory, at least as a signal of change, to devote a large chunk of reflection to the emerging Milan, which of course also counts on Francesco Ragazzi — who is taking strides with Palm Angels by establishing a language that is in a way calmer, and less forcibly rebellious than it was in the beginnings — and Rocco Iannone at Pal Zileri, who embraced a brand of sartorial hedonism that was slowed down by an evident lack of means. (It looked like the brand abruptly cut the budget at one point.)

As for the bigs, it was business as usual. Soft deconstruction at Armani, brash masculinity at Versace, bonkers psychedelia at Marni, eclecticism at Etro, pragmatism with a twist at Fendi, rethought tailoring at Ermenegildo Zegna Couture. Yet, it was not quite business as usual, all considering. The evident exuberance of the slouchy forms and the bright patterns at Armani, not to mention the waistcoats worn over a bare chest, hint at a new sexiness. 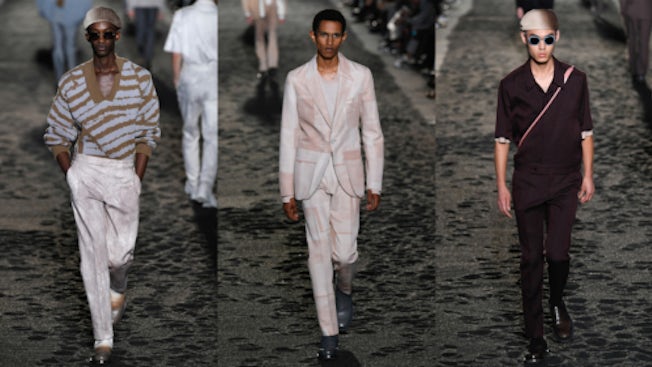 After a few seasons of co-ed shows, Kean Etro went back at presenting menswear on its own, and all the better for it. This was an excellent, and very Etro mix of exotic references and charming eclecticism centred around a wide-ranging desert, from North Africa to Star Wars, which had a fresh ease and a palpable lightness. Indeed, it was a good new start. Respectful of the heritage, but appealing to a wider range of customers.

Things were not so good at Versace. While the Keith Flint-homage that opened the show felt punchy and focused, what followed — the nth mix of heritage motifs, down to a final lounge lizard twist — went a little bit all over the place, diluting it all. The brand is in a state of flux at the moment. More focus will help, because randomness does not pay.

Prince Charming of a certain randomness is also Francesco Risso, who keeps reinforcing his own personal imprint on Marni. Risso proposed a rubbish bin of Tropicália and graphic formality, complete with cardboard hats. He was working around the unlikely marriage — literally, a marriage — between Truman Capote and Ernesto Che Guevara, all of it under a hovering cloud of plastic bottles. It made for an entertaining show for sure, but the thought process behind it felt a little foggy. It was just the hats and multi-material shoes that stuck to the plot, while the rest of the clothing did not have much personality. Risso has talent, but needs to channel his vision way beyond the showmanship, drenching it into the clothing.

The best shows of the season were probably also the quietest in terms of clothing, one very far away from the other when it comes to mise en scène but very close in respect of the message. Silvia Venturini Fendi left sportswear and the digital world aside to embrace the pleasures of gardening with a lovely show en plein air in the gardens of Villa Reale that was an ode to functional clothing in natural fabrics and natural hues done in the marvellous Fendi way. Film director Luca Guadagnino directed the catwalk-cum-gardening stroll — memorable — and designed some botanical prints — forgettable — but it was the utility inspired overalls, fatigues and capes that really stole the show. 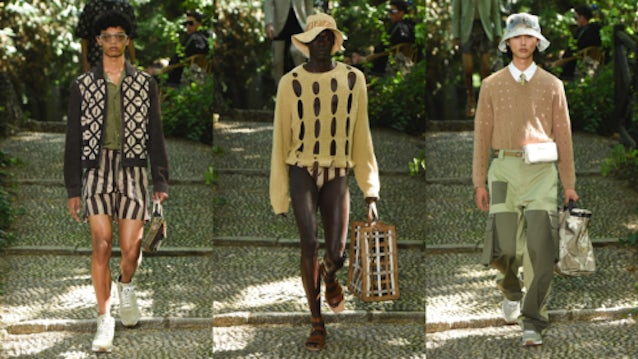 At Ermenegildo Zegna Couture, finally, Alessandro Sartori delivered his best collection since his appointment as artistic director, using the show’s title, “Use the Existing,” to inform everything, from the derelict venue to the recycled wool and polyester fabrics. It made for a statement that felt consistent and real, translated into clothes that had an industrial, dynamic ease that looks very relevant for this moment, without any forced concession to the status quo. The message of continuity between past and present channeled a modern Italian identity, in both product and communication.