NEW YORK, United States — Terms like “Resort” or “Cruise” have never held less meaning than this most recent season, as creatives grapple with “fashion immediacy” in a way that makes sense for both the brand and their customer.

From a messaging perspective, the new ways of doing things can also be quite confusing for editors, forbidden from taking photos at certain presentations and publishing them as usual at others. When photos have been allowed this season — as with Oscar de la Renta and Altuzarra — whipping out your phone almost felt foreign, or wrong, given the sensitivity around the act at other presentations.

Then there is the matter of what collection the brand was actually showing. Public School, for instance, made the relatively bold move of presenting their main men’s and women’s collections — the ones they would normally show here in New York in July and September, respectively — in a combined runway show this past week. They’re calling it Collection 1, a descriptor devoid of any connotation around weather or feeling. It is banal, in the best way. 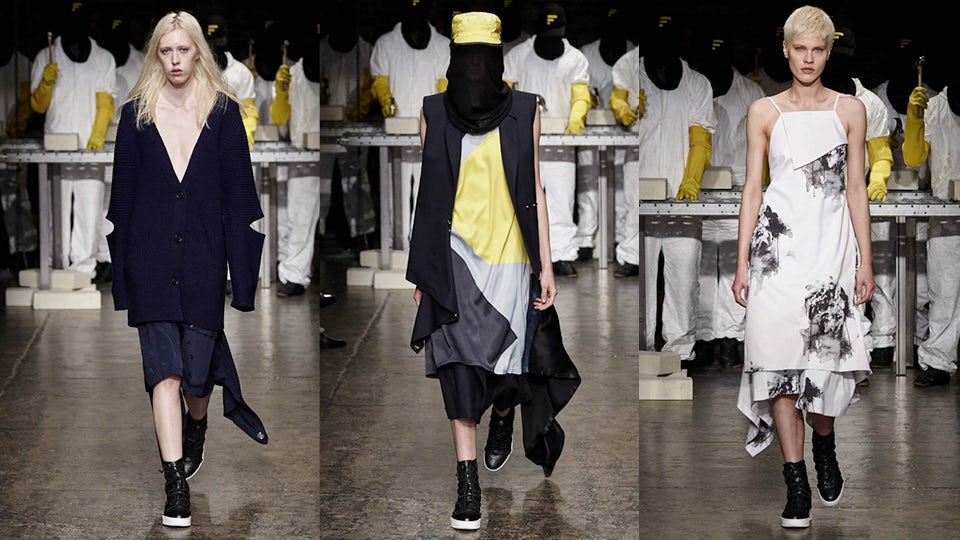 Problem was, the clothes were banal, too. From the beekeeper visors to the flyaway anoraks, they were cool enough, but lacked the authority or originality to have a real impact.

Backstage, though, designers Dao-Yi Chow and Maxwell Osborne seemed like they were in a good place. Not showing on the traditional calendar gave them more room to breathe, even if they were simultaneously working on their resort collection for DKNY. “It let us spend more time developing our ideas, which was the point,” Chow said.

They certainly put thought into the presentation, which featured bricklayers building a wall that was then tagged with the phrase, “We need leaders.” While Osborne hinted that those bricks were an affront to Donald Trump, Chow reasoned it was more wide reaching than that.

“We didn’t really want to make it about one person,” Chow said. “It’s more of a call to action.” But it’s unclear how those ideas are manifesting themselves in the actual garments, which haven’t really evolved. 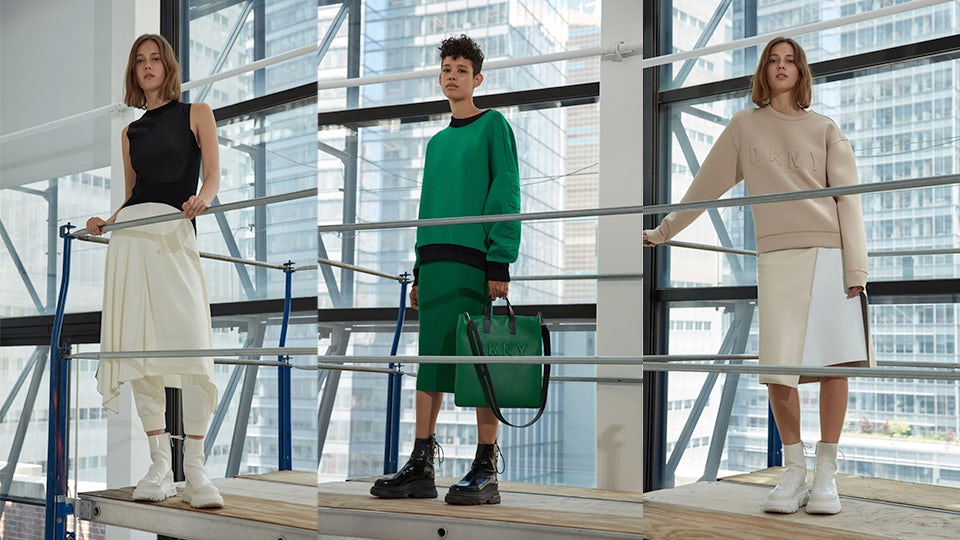 For what it’s worth, DKNY Resort was the most successful collection the duo has designed for the LVMH-owned label since becoming co-creative directors in April 2015. “It needs to be this upbeat brand, but there’s a fine line between being upbeat and happy go lucky,” Chow said. They did a good job of toeing that line this season, presenting slip-dresses etched with imperfect pin stripes, pullover sweatshirts decorated with fat grosgrain drawstrings and spongy sweatshirts embossed with their newly designed logo. Sporty, energetic, but also drawing heavily from streetwear: It felt like what DKNY should be.

Whether or not more brands will adopt Public School’s thinking by showing off-season remains to be seen. But the experimentation has certainly commenced. Alexander Wang will not publish photos of his “Resort 2017” collection until closer to the time it arrives in stores in November; he also plans on including pieces from the collection in his runway show at New York Fashion Week this autumn. “We’ve been talking about it for a good year now,” he said at a preview. “It takes a big commitment from me and the design team to say we’re going to commit to these pieces for September. That’s the hard part, the creative component… but we’re excited to try something new and different." 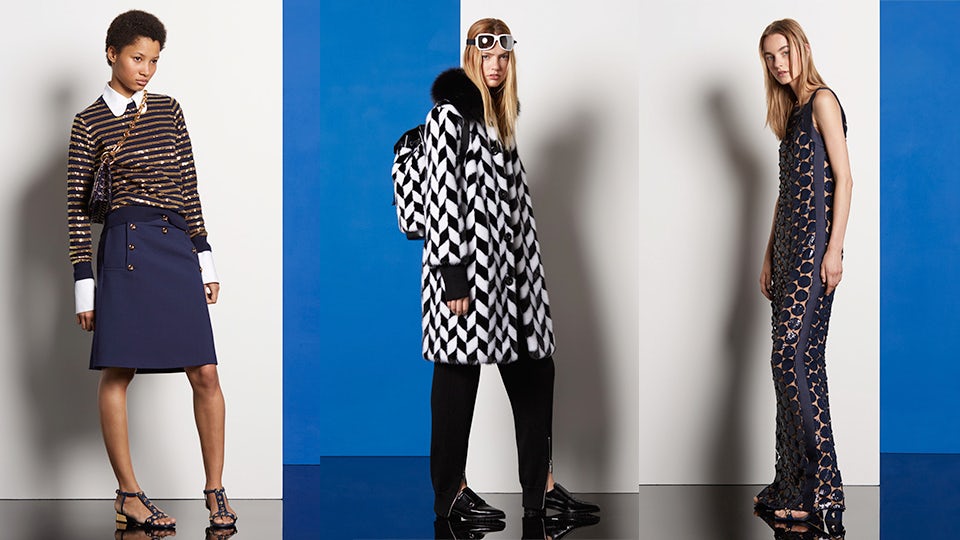 Michael Kors, who banned photos from his salon presentations, released six images to give consumers a taste of what’s to come for what he is still calling “Resort”.

“It’s the era of discretion,” he quipped. “The reality is, our customers are curious about the preview but being deluged with the entire thing is a little too much.”

It was the first instance during this experiment when it was admittedly painful at times not to be able to take photos. The light streaming into Spring Studios may have been ideal for candid snapshots of Kors’ always-sharp-and-entertaining presentation, and this reporter’s favourite look — which involved a broderie anglaise collar designed with grommets — was not included in the limited release. However, the polka-dot palazzo pants, tinsel-stripe t-shirt dress and the chevron mink intarsia coat (complemented by a matching backpack) did offer a sense of the overall graphic, mod-ish feeling of the collection.

With its spectrum of fabric weights and use cases — sun, ski, the typical jet-setting scenarios— the collection encapsulated the idea of multi-climate designing, which adds yet another layer to the “what season is it anyway?” question. 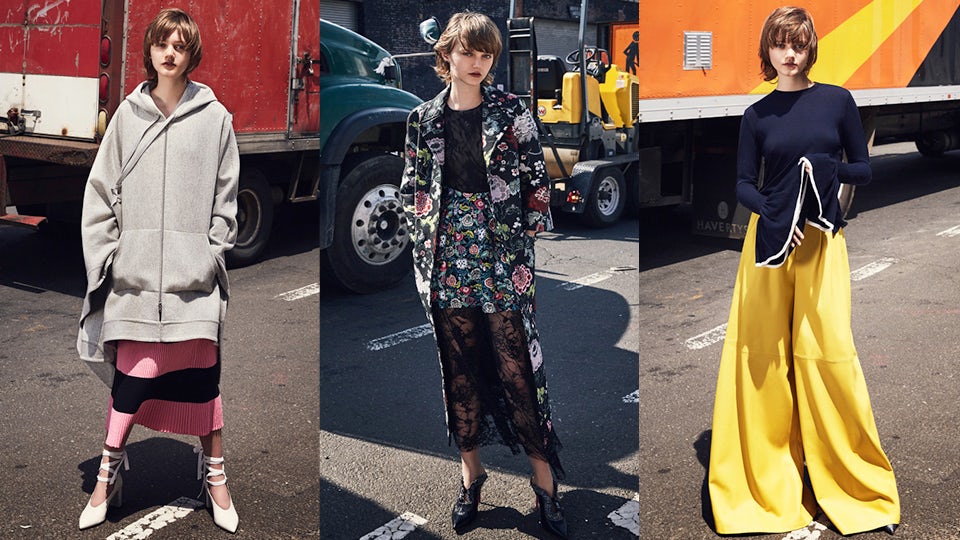 At Adam Lippes, chief executive Donata Minelli Yirmiyahu said the only markets really interested in heavy pieces at the time of year this collection drops are Europe and the United States. Elsewhere, it’s still relatively warm out — if not outright hot. With that in mind, the designer showed a yellow leather cocoon coat and a new iteration of his “opera” coat, this time in a embroidered black floral, both warm-looking but light enough to layer. The collection’s most fetching silhouette — a gathered-front shirtdress — belonged to every season and every temperature.

Lippes, whose tasteful — if not particularly distinctive — designs are tracking well at retail, represents the practical side of what has been on offer this month. Design-wise, creativity rarely trumps commerce in pre-collections. Especially in New York, where the commercial rules. So was the case at Oscar de la Renta, where Peter Copping seemed compelled to present an extremely safe lineup of lace tea dresses, strapless ball gowns and embroidered cardigans matched with pencil skirts. In his time at the brand, Copping has, to date, failed at adding the right dimension of newness to the proceedings. There’s no complexity there. A clean, modern column dress — rendered once in a green satin tied up with fuchsia sash and once in pink quilted with flower buds and pulled together with a mustard yellow bow — hinted at what Copping’s Oscar could be. 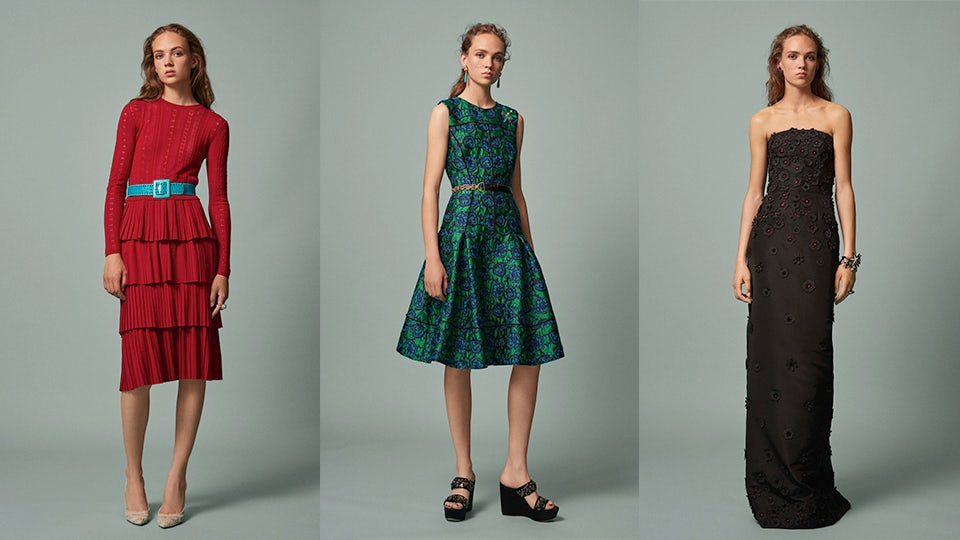 Julie de Libran, artistic director of Sonia Rykiel, has long understood how to make the practical crackle; she makes you want to shop. Her latest collection, shown in the brand’s newly refurbished Upper East Side boutique — shelves stacked with books and a floor covered in an André Saraiva-designed carpet scribbled with red lips and makeup compacts — had an air of 1970s rive gauche, with its ric-rac detailing, off-the-shoulder blouses and hand-cinched waists on everything from a double-belted cotton gabardine blazer to a gauzy cotton black dress.

Several of the models, their heads wrapped in printed scarves, jingled as they walked through the space wearing tiered dresses adorned with gold coin-like accoutrements. “I love all the tailoring that you can contrast with things that are more airy and fluid,” she said between presentations. “I really wanted this collection to feel very fresh. For me, it wasn’t taking it literally from the seventies, but there is [always] that kind of girl. It’s the attitude, I think.” 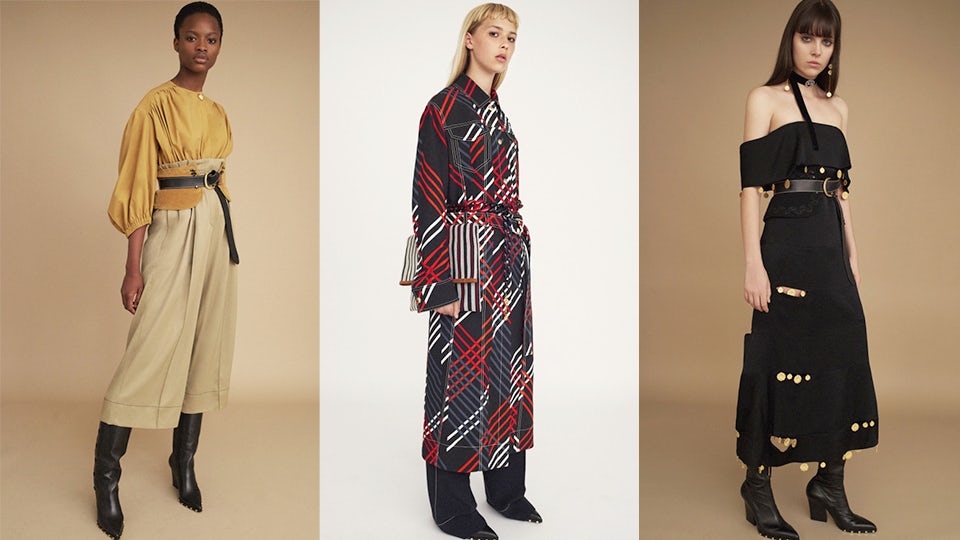 Earlier in the day, De Libran’s former boss at Louis Vuitton, Marc Jacobs, was busy selling an entirely different, if equally as vibrant, dream. More than 50 models paraded through the designer’s showroom to Duran Duran, wearing Anne of Green Gables-level puffed sleeves, oversize patchwork bombers and MTV-logo sweatshirts in an eighties-fuelled mashup. Clothes like these fulfill childhood fantasies of Fashion with a capital F, and creatives like Gucci’s Alessandro Michele and Hedi Slimane have built wildly successful business with clothes seemingly plucked from the world’s most fabulous fancy-dress trunks. 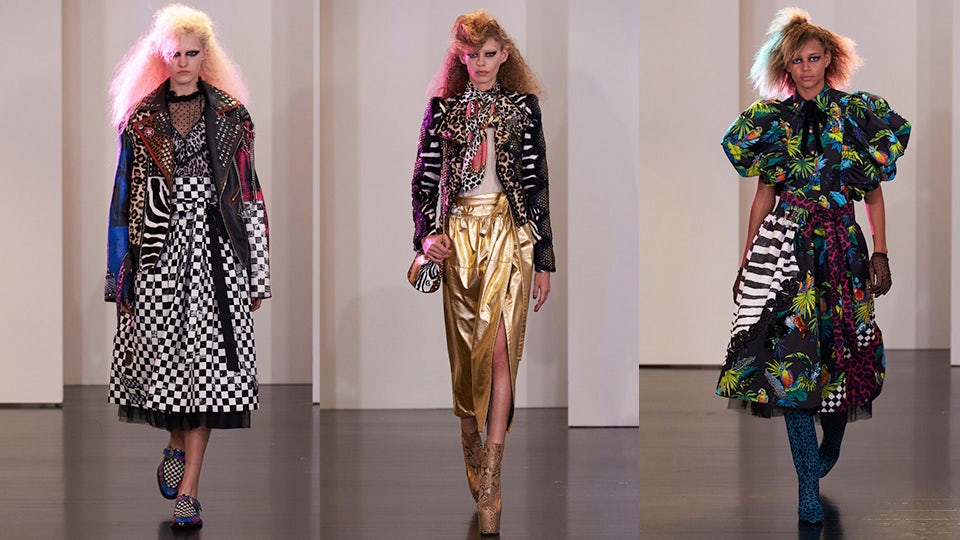 But the approach is only successful when the designer lulls the consumer into a sort of psychedelic fever that eliminates any question of need versus want. Jacobs, generally a master of appropriation, may not have hit the mark this time. Without the models crimped hair and the sound of “Rio” blasting from the loudspeakers, most of these individual items — save for the novel MTV sweatshirt and those blown-up sleeves — didn’t have the tongue-hanging appeal required to work beyond the show.

At his showroom, Thom Browne showed some wild items, but his through-line — expert, inventive tailoring — makes his pastel-patchwork fur coat or daisy-embroidered suiting feel joyful instead of untouchable. “I want to bring back that era of great American sportswear,” he said. “Back in the fifties and sixties when everything in American sportswear wasn’t price driven; just beautifully made, more casual clothes.” 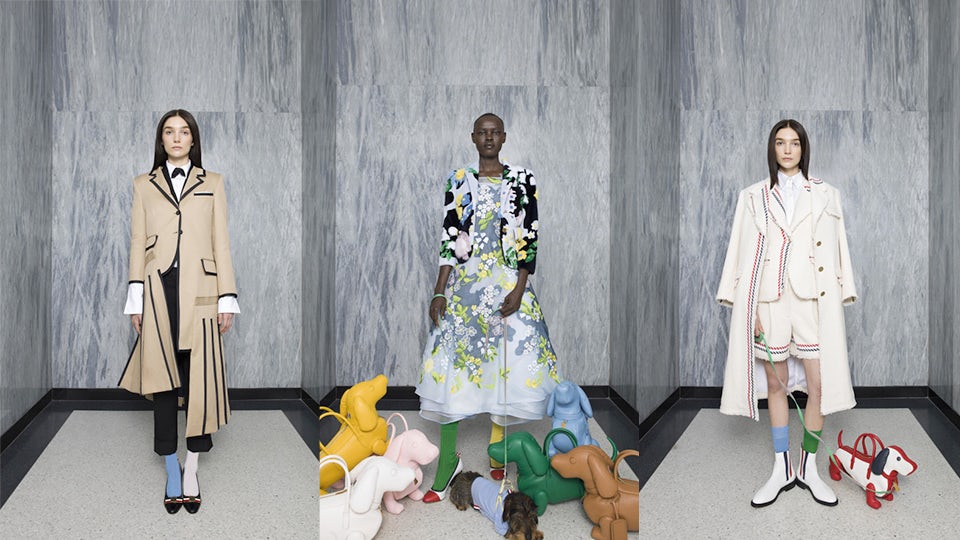 There was a Jordan-almond bag full of smile-inducing looks, with a palette inspired by the Kodachrome saturation of vintage magazine photos. A banded-collar blouse — done in organza instead of traditional cotton and embroidered with big, fuzzy flowers — was a shining example of what Browne wants to achieve with his still-nascent women’s collection. His inside-out jackets, perhaps designed for more adventurous clients, displayed the beauty in the process.

It’s interesting; the brands that have managed to make an impression this season tend to be the ones less preoccupied with the hullabaloo around fashion immediacy. One of the things that makes still-emerging New York designer Rosie Assoulin such a popular choice for formal events among socialites is her playful attitude toward fashion. At Assoulin’s presentation, the models participated in a game of musical chairs, gleefully tripping over their fruit-embroidered and crinkled-gingham gowns with abundant layers of flounce and frill. “The point is to have a little fun,” she said. Assoulin’s outward success might be credited to her ability to stick to her chosen course. She hasn’t participated in any big competitions or declared ambitions to stage a runway show.

Joseph Altuzarra, who continues to be the one to watch in New York, is similarly thoughtful. There may not be another young American designer so skilled at pushing himself forward creatively without forgetting about his growing client base. This collection’s big proposal was lace for day, with a rainbow of separates rendered in saturated, contrasting colours. Skirts were paired with stitched-up leather jackets or heftier sweaters striped with grommet-ed ribbon; a lace tee was layered over a mini skirt, a new silhouette for a designer who owes much of his career to the high-slit pencil skirt.

There’s always a level of heat at Altuzarra. This season, he was thinking about Emmanuelle Seigner in Roman Polanski’s 1988 film Frantic; that jolt of 1980s sex appeal was evident in this gathered-front leather pencil skirt. But the genius of his clothes lies in how democratic they actually are. Because of his constant attention to the waist, combined with a tendency to favour a silhouette that glides over the hips without squeezing them or puffing them up, you don’t need to have Seigner’s body circa-1988 to feel beautiful wearing them. 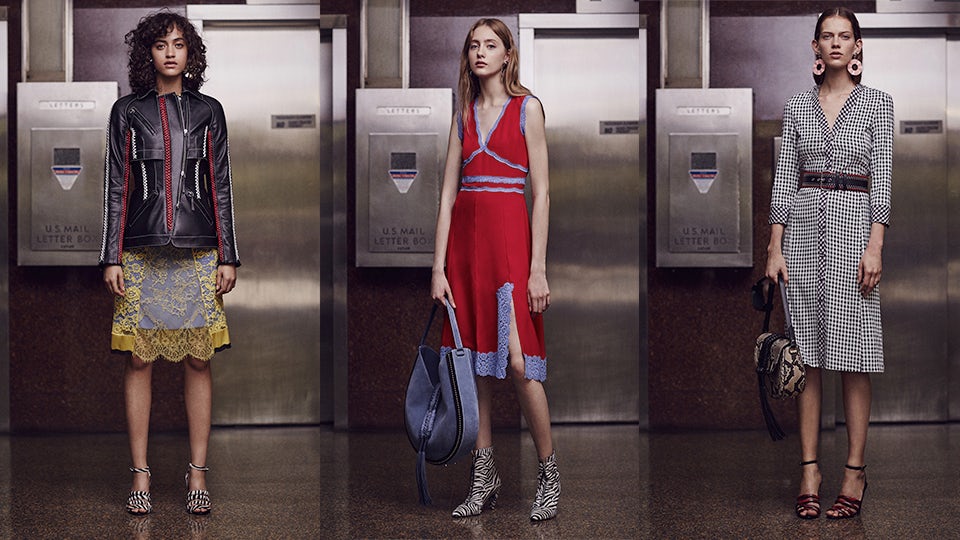 Which is precisely the point: Altuzarra not only wants to make great clothes, but he also wants to sell them. Which is perhaps why he’s not so caught up in the “fashion immediacy” conversation.

“My customer is looking for really, really good product. Whether they see it six months prior or they see it when they go in the store, I don’t think it makes a huge difference to them,” he said after his presentation. “If I felt like my customer was on Instagram all the time and was maybe getting tired of it, if I felt like there was something we could do to correct our process, I think I would do it."

Indeed, in this most commercial of seasons, making things people actually want to buy — or at least dream of buying — should be top of mind. After all, the rest is just semantics.