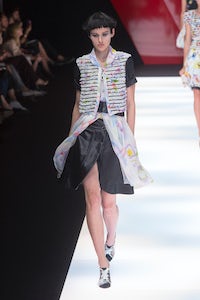 MILAN, Italy — Robots are able to do everything else now, but can they drink cocktails yet? That seemed to be the scenario that Giorgio Armani was proposing with his latest collection: a cyber-bar, populated by automatons in cocktail attire sporting uniform black bobbed wigs. There’s a new Bladerunner just around the corner and the women who populated Armani’s catwalk could have stepped straight out of that world as cyber sophisticates.

Such a mechanical notion would seem to jar with the ethos that made the designer his billions. There were a handful of daywear looks in the middle of the show, pants and jackets, that looked like “conventional” Armani, but they only served to highlight the burning question: what’s conventional Armani anymore? The shirt dresses worn over black shorts, their bodices decorated with what looked like shattered glass? The sheer polka dotted pantsuit? It pays to remember that, while Armani sealed his reputation as a radical by deconstructing and softening traditional sartoria, he always had an appetite for the surrealists. In which light, pom-pom hats, huge ruffs of tulle and a transparent stole of pink and teal pussywillows could be construed as playful provocations. Maybe so if the presiding mood of the collection hadn’t been so dark.

Jarring again…the basic building block was black silk, Stygian, light-sucking, lurking under everything like an oil slick. This, from a man whose signature is either a neutral, versatile greige or a lustrous Saharan nighttime navy. The collection’s accent colours were pistachio and pink, which could scarcely hold their own against jet black. Nor could the floral graphics. Maybe imbalance was the point. Armani is sage. He can scarcely be feeling sanguine about the world he sees around him. Still, it’s back to the Sahara for him, we say. Navy, Giorgio. Navy!