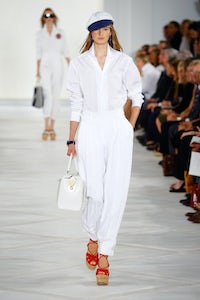 NEW YORK, United States — As Ralph Lauren took his bow, Frank Sinatra crooned, “I love Paris in the springtime”. Couple that with the chanteuse cooing in French on the show soundtrack, and it was easy to imagine that the heavenly yacht club Lauren was evoking with his new collection was points south of Paris — rather than points east of Manhattan. Red, white and blue is, after all, as French as it is American. And living well on the Riviera was the best revenge for Gerald and Sara Murphy and their dear friends the Fitzgeralds.

Geography aside, Lauren’s clothes embodied a luxuriant physicality. Emphasis on body: racer backs, bared shoulders and midriffs, short shorts, second-skin knits and skirts slit high threw a spotlight on toned limbs and torsos. So did swoops of bias-cutting which, when scissored into eveningwear out of the lightest, freshest blue and white striped cotton, offered an unfeasibly easy full-on dress-up option. You could jump off a boat in a dress like that and not feel wretched in the morning.

And let’s talk about those reds, those whites and those blues. Vermilion and luminous cobalt played off spectacularly against blinding white. Add trad-stripes and you had a consummately simple, stylish statement. Unfortunately, it didn’t stop there. A yacht sail graphic abstracted into a primary-coloured mosaic looked effortful in this context. And a passage of pieces in butterscotch leather was delicious to think about, but it felt like a weight where there had been none before. 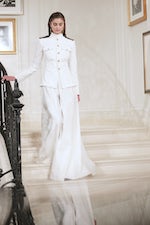 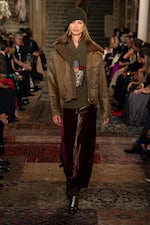 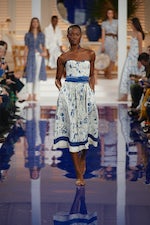 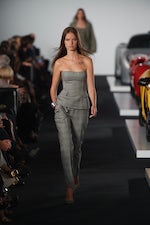