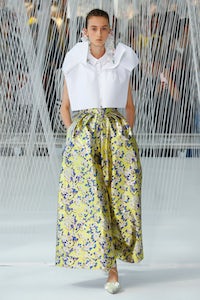 NEW YORK, United States — It’s hard to take a bad picture at a Delpozo runway show. Creative director Josep Font’s three-dimensional constructs lend themselves to creating the sharpest of images. Just consider the origami pleats jutting out from an off-the-shoulder top, the giant raffia flowers arranged on the front of a sweater, and a sculpted dirndl skirt built on the bottom of an apron dress.

In Font’s case, decisions about fabric are as important as to where to place a peplum. There is something almost scientific about his work.

The heavenly colour pairings don’t hurt, either. Cornflower blue and sunset orange, lavender and lemon-lime, periwinkle and buttercup yellow were all shown against a chalk-white backdrop, the model’s ears dangling with streaming clusters of floral paillettes that caught the late-morning light just so. Backstage, the designer said that light was indeed the driving force in this collection, inspired in part by Korean-American artist Soo Sunny Park’s mesmerising iridescent Plexiglass and mesh installations.

But while Font’s head-turning shapes may be at the forefront of the conversation, what is perhaps more interesting about his process are the materials he uses to sculpt them. For instance, this collection incorporated several weights of linen. A lighter version was softly moulded into curved-pleat peg-leg trousers, while a stiff, denser variety was used to form ballooning bell sleeves. In Font’s case, decisions about fabric are as important as to where to place a peplum. There is something almost scientific about his work.