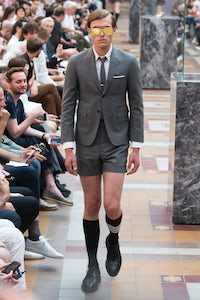 PARIS, France — Thom Browne called this his Why Not? Collection. That’s because, when he was asked why he was showing men in long skirts and dresses and 8cm heels, his answer sounded direct, though it was actually as opaque as all his answers to Big Questions: Why not?

He said he’d simply taken his classic women’s collection and re-proportioned it for men, so, in his eyes, there was no doubt he was showing men’s clothes. In 2003, Browne’s partner Andrew Bolton, now Head Curator of the Metropolitan Museum’s Costume Institute, curated a show for the V&A called Men in Skirts, which offered ample proof that, throughout history, the wearing of skirts, far from ungendering men, has actually reinforced their maleness. Building on that, Browne insisted it was amazing how the models walking in his heels almost did end up walking more masculinely. He’d had a go himself. “Different,” was all he’d say.

You can anticipate a fashion designer addressing gender and identity issues in such a politically charged time. It happened most recently in New York with Vaquera’s Handmaid’s Tale show. But on Sunday night Browne wasn’t that designer, even if he had soundtracked his show with the music from Sally Potter’s film of Orlando, based on Virginia Woolf’s fantasy of gender fluidity.

The awkwardness of some of the models could have indicated acute vulnerability (an old Miuccia Prada trick), so, yes, his show was loaded. But the weight was actually personal. On the runway were three plinths, a pair of shoes mounted on each, all gold-plated. There was a pair of brogues, a pair of heels and a pair of baby shoes, Browne's own, as it happened. In a piece of subtle theatre, the models seemed to reverently acknowledge the baby shoes as they passed them. “I wanted them to look at the shoes,” Browne said. “Back to where it all started.”

You could go all sorts of places with that. I thought of the final scenes of 2001 or Jeff Koons’s ironically memorialized tokens of innocence or Wordsworth’s “The child is father of the man.”  Browne would only add, “There’s something very charming about looking back.”

And the clothes themselves were old friends, in Browne’s world at least: the fine grey flannels, the seersuckers, the crinkled poplin shirts and narrow ties, the out-of-time patrician elegance. Hector, his dog, made an appearance as a little gold embroidery (like the anchors, whales and  lobsters that preppy folk love). With their shaved heads and dignified silhouettes, Browne’s boys looked like escapees from an August Sander photo, or Michael Haneke’s The White Ribbon (actually the Browne-est movie ever made!).

Now for the punch line. Something that often gets overlooked in Browne’s productions is his sly sense of humour. He once said he’d be happy for people to laugh when the show is over. He showed a bride-and-groom-in-one for his latest finale. It had some of Tim Burton’s skewed humour, darkly funny, if not exactly laugh-out-loud. But much wrier was the fact that, in a season where fashion is infatuated with boyish limbs bared by short shorts, Browne, whose own look that has been since time immemorial, should choose to cover male legs with pencil skirts and librarian pleats. Stick that in your pipe, fashion…and smoke it.