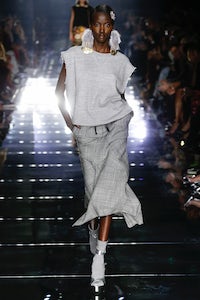 On the runway itself, the designer nodded to LA’s signature relaxed style by pairing a glamourous, billowing tie-dye poncho with... sweatpants. Then, there were the sly references to workout culture with cropped sleeveless gym tops (à la Rocky) worn with flashy skirts and thigh-high boots or patchworked denim. Of course, all the typical Tom Ford touchstones were there — the sumptuous outerwear, the rich jewel tones, the tactile suedes and velvets, the 70s swagger — adding up to powerful sensuality for women and playful rakishness for men. The front row swayed to the groovy disco tunes and oohed and aahed as Kendall Jenner and the Hadid sisters clomped down the runway.

But behind this glamorous facade, some saw a brewing storm. When Ford announced in December that he’d be showing in Los Angeles to coincide with the Academy Awards in lieu of appearing on the official New York schedule, the hand-wringing began almost immediately. After all, he had just been named chairman of the Council of Fashion Designers of America, and his decision was interpreted by some as a betrayal of New York Fashion Week, an event he was supposed to be championing, especially when other tentpole names are missing from their home turf.

Steven Kolb, the CFDA’s chief executive, put on a brave face before the event. “The CFDA is invested in a strong, well-curated NYFW,” he said via email. “There is strength in numbers, but we also realise brands will sometimes show elsewhere as part of their business strategy.” Asked specifically about Ford’s decision, he added: “The Oscars red carpet firmly puts the spotlight on fashion. Tom’s LA show highlights American fashion overall. We worked very closely with his team to make sure the LA show does not impact designers showing at NYFW.”

Still, the relevance of New York’s fashion week (at least in its current incarnation) is undoubtedly in question. And yet it’s worth remembering that Ford’s changeup is not only a comment on the decline of New York; it’s an endorsement of LA, which after all also falls under his umbrella as CFDA Chairman. Indeed, when he first announced his decision to show in LA this season, Ford released a statement to The Business of Fashion saying: “Someone asked me the other day how I could justify showing in LA as I am now the Chairman of the CFDA, and I reminded them that CFDA stood for the Council of Fashion Designers of America and not the Council of Fashion Designers of New York.”

For Ford, LA was the right choice. His brand is a red-carpet favourite and his links to the film industry run deep. Over the past decade, he has even made his name as a director. “LA makes total sense for him,” said Richard Christiansen, founder of the media and branded entertainment agency Chandelier Creative. “He is the best at glamour, which one finds at the intersection of cinema and fashion.”

Showing away from the fray had its benefits, too. “The NYFW climate is almost cannibalistic,” Christiansen continued. “It's almost a performance on steroids that you don't leave inspired, but in shock. I think LA can offer that different vibe, more relaxed, more dreamlike, to breed mesmerising and bewitching experiences.”

“Go to where the eyeballs are,” shrugged stylist Jeanne Yang, on her way out of the show venue with client Jason Momoa, as she gestured toward the clump of A-listers and the flashbulbs of the paparazzi that followed them.

“It’s an isolated weekend when the Oscars overlap with New York Fashion Week,” added Nina Garcia, editor-in-chief of American Elle. “We all know the power of the stars. And Tom doesn’t just dress them, he’s friends with them. So this makes sense. Whatever’s happening at NYFW is already an obvious fact. This is something else, in addition.”

Ford has always shrewdly done whatever he thinks is best for his brand from season to season, courting conversation (and sometimes controversy) along the way, from a couture-style show where mobile phones were banned to see-now, buy-now (ha, remember that?). Now, as CFDA President, he seems to be saying to the rest of American fashion: ignore the time-honoured model because, well, it’s not working for everyone. Present your collection in a way that makes sense for your brand and your audience. Rachel Comey, for example, certainly doesn’t need to present her collections the same way as Louis Vuitton, say, because that don’t operate their businesses the same way.

It doesn’t mean that fashion shows are dead. “Nothing can or will ever replace the experience of a live show or in-person presentations,” said Kolb. But they are increasingly about capturing and transmitting digital content and a one-size-fits-all approach is starting to look decidedly obsolete. When Fashion Week is less of a tradeshow built around Manhattan catwalks and more of a global spectacle that exists, mostly, on mobile phones, the possibilities are endless. And Ford, who is a consummate showman, did what he does best: he put on a big, fabulous show that got people talking.

Tom Ford Will Head Back to LA for Next Runway Show