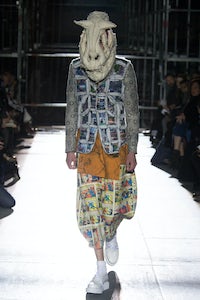 PARIS, France — Rei Kawakubo’s models stepped onto the catwalk on Friday afternoon with heads encased in monstrous dinosaur skulls, moulded from fabric by Japanese artist Shimoda Masakatsu. One of her customary cryptic comments on her new collection was this: Inner Rebel. Perhaps the skulls were a pointer to the beast within. But Kawakubo’s other comment was White Shock. You could put a socio-political spin on that. When I did, I soon found myself at Goya and “The sleep of reason breeds monsters”. Cue monsters on a Comme catwalk.

The world has slipped sideways, politically, economically, climactically… Who can query that? In one of those peculiar synchronicities which haunts sensitive souls in all such moments in time, the narrow doorway that led to the Comme show shared real estate with a nitespot called Le Dernier Bar avant la Fin du Monde. The Last Bar before the End of the World. I looked it up. It claims inspiration from “imaginary worlds”…. (…and The Simpsons. It serves a Flaming Moe.)

You might assume the same of Rei Kawakubo. The first act of her latest menswear show featured those massive skulls, a superhero cartoon strip and another print of an aerial view of a city (superhero’s eye view). There was also a terrazzo marble print matched to a polka dot. Suggestions of civilization. Act II switched to a world of clinical white, an eerie Nurse Ratched vibe of narcotized restraint. The finale combined the two – the monsters, the white – in a synthesis that disturbed, rather than reassured. It felt like worlds in collision, which happens to be the title of Immanuel Velikovsky’s doomsday text. I could only be grateful to Kawakubo for bringing it to my mind while I puzzled out her own scenario for the end of days.