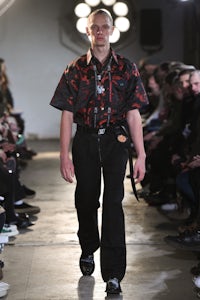 LONDON, United Kingdom — Last season, Zhou invented a fake corporation where all the employees dressed in the traditional uniform of two-piece suits and straight-laced ties. It was the gateway to a much deeper world, as Zhou reinvented that concept into a cinematic narrative this time round, with the men in the show representing different characters and the fake corporation acting as a plot device for his elaborate storytelling.

First up there was the protagonist in open Chinese silk shirts and slouchy trousers, ready for action and surprise. Menacing hitmen were dressed in precise tailoring with perpendicular shoulders and chubby fur stoles, perfectly strapped into place on the chest. The utilitarian workers wore contrast-seamed jackets and cargo pants, followed by a tribe of intern-level boys with their leather ties tucked into their untucked shirts and Kung Fu henchmen in robes that were reimagined as streamlined tailoring. At the end of the show, nothing could be confused for anything other than eccentric villains, dressed to kill in opera sunglasses, contrasting Cruella de Vil yin-and-yang coats, dragon feet shoes and sheaths of dark chiffon shrouding their faces.

The result was a line-up of brilliantly costumed characters, and the grouping of them together demonstrated just how ingrained archetypes are in our minds. Zhou may have even been commenting on that — and subverting it by toying with it so viscerally. Where he really shined, however, was in his artful and witty cross-pollination of western and eastern tropes. The age-old Silk Road connection is well-trodden territory in the worlds of fashion, art and cinema, but where other (mainly western) designers have tiptoed around Chinese iconography in either a tepidly precious or aggressively presumptive manner, Zhou is in his element when it comes to addressing his countrymen’s past and future.

He confidently used some the most glaringly obvious symbols of China: ginormous fans as accoutrements, screen-printed Chinese letters, paintings of dragons, conical rice farmer hats, Mandarin collars and metallic brocade. Based between Beijing and Amsterdam, Zhou is part of a new generation of Chinese creatives who are not shying away from the aspects of their culture that have often been stereotyped or previously considered kitsch. Instead, he calls himself a “Techno-Orientalist” because he subverts traditional orientalist imagery (think Edward Said), which many would find outdated and offensive, and brazenly layers it with references to the hallmarks of European culture and tailoring. It’s a formula that could well succeed on both sides of the world.