With his gift for provocation, you could only wish Kanye West’s fashion had more fangs. There was nothing here that he hadn’t done before. 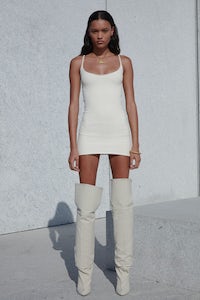 With his gift for provocation, you could only wish Kanye West’s fashion had more fangs. There was nothing here that he hadn’t done before.

NEW YORK, United States — Italian conceptual artist Vanessa Beecroft likes to stage her performance pieces in locations which have some kind of significance, either political, historical or social. Her latest managed to combine all three.

It took place in Franklin D. Roosevelt Four Freedoms Park, at the tip of Roosevelt Island in New York City’s East River. In his State of the Union address in 1941, Roosevelt defined the four as freedom of speech, freedom of worship, freedom from want and freedom from fear. This, in a year when Europe was crumbling under Hitler’s advance. Now we have another unusually fraught year, with a presidential campaign that has exposed a disturbing state of dis-union, with political, historical and social divisions gaping ever wider.

All of which makes the context for Beecroft’s new art piece particularly telling. She’s been working closely with Kanye West for a while now (only recently removed, she claims, from the full-time payroll) and her longtime preoccupation with identity politics gels well with the increasingly politicised direction — both personal and in the wider sense of the notion — his music has taken. You can see the same process happening with his friend Beyoncé. In the era of #BlackLivesMatter, it is the enlightened artist’s obligation to call out injustice.

All the years when fashion talked about “nude” as a trend, it meant your basic Caucasian. No longer.

But quite how today’s collaboration between West and Beecroft enhanced enlightenment is another question. There was an imbalance between her bit — dozens of women standing motionless in the hot sun, wearing body-shaping workout wear but not particularly much of it — and his bit, where there was an actual fashion show of clothing and accessories.

Beecroft’s performance piece was trance-like, starting with a motionless passivity which her models eventually dismissed, making their own shapes as they crouched or coiled in reaction to her imposed stasis. Even if it posed the artist herself in an ambiguous light, the feminist subtext was distinct.

Then came West’s models in their thigh-high boots, clingy knit micro-dresses and oversized outerwear: huge parkas and puffas in military tones. Weaponised womanhood in a somewhat old school, 80s fashion fanboy way. What really stood out was how the colour palette captured a diversity of fleshtone. All the years when fashion talked about “nude” as a trend, it meant your basic Caucasian. No longer.

But there was nothing here that Beecroft or West hadn’t done before, art, fashion, or collaboration-wise. I actually missed the sturm und drang of the huge refugee scenario the duo staged in Madison Square Gardens last season.

They’re both such lightning rods for controversy that there will undoubtedly be a tsunami of on-line complaint about this show starting with the casting call: “Multiracial women only.” Beecroft has always favoured a uniformity with the models for her performance pieces, so the specificity of the stipulation fitted with her track record. But I was wondering if this was more a Kanye request, reflective of a desire for the detoxification of division. With his gift for provocation though, you could only wish the fashion had more fangs. 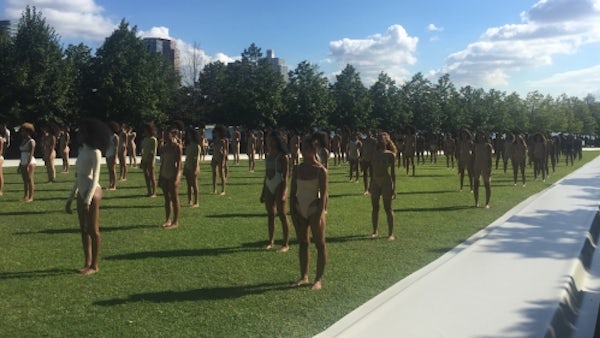