Massimiliano Giornetti's colourful Dada-inspired collection for Salvatore Ferragamo was as elegant as always, but a tad bolder. 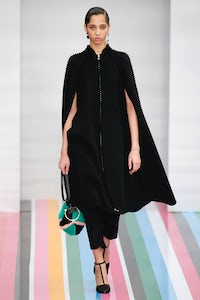 Massimiliano Giornetti's colourful Dada-inspired collection for Salvatore Ferragamo was as elegant as always, but a tad bolder.

MILAN, Italy — Images of the work of Dadaist artist Hannah Hoch were pinned on Massimiliano Giornetti's moodboard at Sunday's Salvatore Ferragamo show. Giornetti was particularly interested in Hoch's dolls — "dolls for adults," the designer pointed out — not the heavily political work for which artist is best known. Indeed, the zig-zig raw cuts that characterised many of the looks that hit the runway were redolent of old-fashioned doll's clothes — think German marionettes, not Barbie.

Giornetti said he wanted the collection to express a sense of joy and playfulness, while tapping into Ferragamo's artisanal savoir faire. The result was less about an outburst of exuberance, however. Giornetti is a controlled designer and his idea of joy was more about clashing primary colours and geometric intarsia applied to lean, easy silhouettes (Hoch was active in the 1930s and this is where the elongation came from). The idea of rigorous collage was everywhere, from vertical patchwork stripes to working zippers used as decoration — coats and jackets could be literally be taken apart — to horizontally striped dresses made of "modules" that were buttoned together.

It worked. This was a sophisticated and fresh way to work with colour and exuded a certain assertiveness, with looks worthy of real life, not just catwalk fantasy. In this sense, the blouses mixed with differently patterned skirts should not have made it into the show. We have already seen too much of that.

Giornetti's distinctive style is all about poise and equilibrium. He never screams, but always manages to hit a spot. He did it again this season. His subtly, however, is just as much a weakness as a strength. In this era of loudness, he stands above the others, but risks flying under the radar. This collection was a positive step towards something just as elegant as his previous efforts, but a tad bolder. 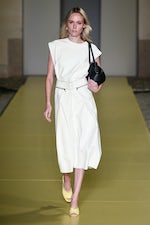 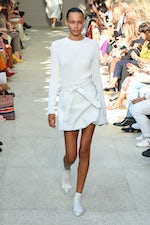 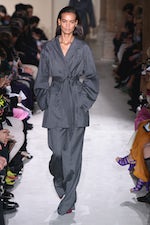 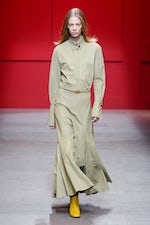