BoF Exclusive | Film Premiere: Band of Outsiders' Scott Sternberg in Being There, by The Little Squares

Following our First Person chat with Scott Sternberg earlier this week, BoF is pleased to bring you the exclusive world premiere of Band of Outsiders' Scott Sternberg in Being There, directed by Debra Scherer for The Little Squares

NEW YORK, United States — Back in 1991, when Debra Scherer and Luca Stoppini first collaborated on an editorial about theoretical architecture for Vogue Italia, neither of them could have predicted the length and depth of the creative partnership that would ensue. Today Stoppini is one of the most respected art directors in the business, while Scherer has become one of our most compelling storytellers. Their collective body of work is impressive.

Scherer may be the only editor in the business to have worked for all three of Vogue's most prestigious titles — Paris Vogue, U.S. Vogue in New York, and Vogue Italia in Milan — with some of the most renowned editors in the business, including Anna Wintour, Franca Sozzani and Candy Pratts-Price.

Stoppini is art director of Vogue Italia — a position he continues to hold after two decades — and is the creative force behind L'Uomo Vogue and Casa Vogue. He has worked on advertising campaigns for some of Italian fashion's biggest brands, including Giorgio Armani, Dolce & Gabbana, Gianfranco Ferre, Gianni Versace, Prada and Valentino. 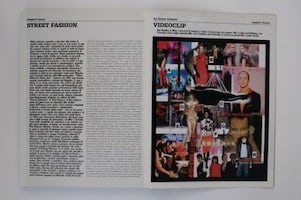 Things first gathered steam for their creative partnership in the late 1990s with a regular "Street Fashion" feature called Vogue's Focus, for which New York-based Scherer would send carefully-sourced images of pop culture movements and style tribes via snail mail to Stoppini in Milan. Taking Scherer's lead, he then designed collage-style layouts, capturing a unique visual snapshot of the American cultural zeitgeist for the pages of Italian Vogue.

"He understands what I mean without having to explain anything," says Scherer. Indeed, for the entire three years of working on Vogue's Focus, the two did not speak on the phone or see each other even once.

Notably, these two traditional media editors have adapted their creative process to the internet. Stoppini thinks of Scherer's process as a very personal, sophisticated form of storytelling which transcends the medium used, while Scherer says that Stoppini designs horizontally, a perfect fit for moving image and horizontal scrolling which is being popularised by tablet devices such as the iPad.

"It's just another set of tools in our arsenal to help us express our ideas," says Sherer.

One major source of inspiration for the visual depiction of these stories is Eadweard Muybridge, known primarily for his pioneering work using multiple cameras and shots to capture animal locomotion. Hence the name The Little Squares, a collaborative of visual professionals using a mashup of old and new media tools to tell stories, such as the ones they recently created for jewellery designer Philip Crangi and musicians Dean and Britta.

Scherer says all of her films straddle the border of non-fiction and fiction. Each one, she says, is based on a true story. Today we are delighted to bring you one such story of Scott Sternberg and Band of Outsiders, inspired by Hal Ashby's classic Being There, starring Peter Sellers.