The half-Turkish designer grew up in Canada before moving to London to set up his label, known for its sharp shapes and dark floral prints.

Erdem Moralioglu is the eponymous founder of fashion label Erdem, which he started in 2005 with a collection of softly sweeping dresses and floral prints, now a part of his signature aesthetic. The half-Turkish and half-British designer was born in Montréal, where he also grew up and took an interest in fashion at a young age.

Moralioglu earned a bachelor's degree in fashion at Ryerson University in Toronto before moving to London in 2001 to attend the Royal College of Art, having been inspired by his mother, who hailed from Birmingham, to steep himself in British culture and fashion. He interned at Vivienne Westwood and a stint at Diane von Furstenberg after graduation took him to New York for a year, but he quickly returned to establish his home base and studio in Shoreditch in East London.

Erdem is sold in over 170 retailers, including Barneys, Bergdorf Goodman, Selfridges and Le Bon Marche. The brand has a shop in Saks Fifth Avenue, launched an e-commerce store in 2014 and opened its debut flagship store in London's Mayfair in 2015. The brand has also collaborated with H&M in 2017, and a beauty collection with NARS and the Royal Ballet for Christopher Wheeldon's production, Corybantic Games, in 2018. 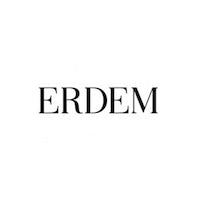 None of Your Business with Erdem Moralioglu