After decades at the helm of British Vogue’s art direction team, he left to join an agency helping brands develop campaigns.

Celebrated creative director and Central Saint Martins alumnus Robin Derrick cut his teeth in art direction at independent fashion magazines i-D and The Face. Derrick told Central Saint Martins student magazine 1Granary that beginning his career at i-D was "amazing; they gave me my first big break and I am incredibly affectionate towards them.” The art director then moved to The Face, “it was simply a chance to do something else. Definitely a career choice not an aesthetic choice. Back in the day, they were very from different camps. There was Blitz, i-D, The Face… in theory there was rivalry. I was one of the first to go from one magazine to another.”

The zenith of the Derrick’s career thus far, however, is his impressive 19-year tenure at British Vogue. “What I liked most was that you could say stuff like, “why not put Kylie Minogue in a champagne glass?” and a week later it would happen. There is a river going by of popular culture, and if you’re working for a magazine or blog — any media — you are throwing stones into that river. Sometimes they make a splash, but the river will move on and ultimately so will everything else. When working for Vogue, in particular, my motivation was this: if I could make four great covers a year, that would be great.” Derrick has also art-directed Glamour, playing an integral role in the formation of the magazine design identity.

After 19 years at Vogue, Derrick joined a veritable exodus of top talent making the move from traditional publishing to commercial content, becoming executive creative director of Spring, a London-based studio complex and creative agency that helps clients like Giorgio Armani and Target develop multi-channel communications campaigns. “When I think, two years ago I was spending $6.5 million of Giorgio Armani’s money every season to take 80 still pictures… Now I’m talking to Zara about making daily content; the shift from seasonal campaigns to year-round media. Basically, we’re an agency that works at the highest creative level and have invested a lot of money in creating the first global communications ad agency for fashion and beauty, which hasn’t before existed.”

Derrick does, however, still work with fashion’s print establishment, redesigning Harper’s Bazaar print magazine and the title's digital channels in 2012. He departed Spring Studios in July 2018 and has since co-founded beauty start-up MyBeautyBrand, of which he is also the chief executive. 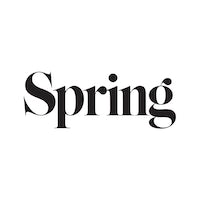