The German PR guru leads her eponymous international agency and handles press, runway production and showrooms for over 70 global brands.

Public relations maven Karla Otto founded her eponymous company in 1982 after a short career as a model exposed her to the fashion industry. Since then, she has helped brands like Jean-Paul Gaultier , Prada, Marni and Jil Sander expand and promote their businesses abroad. With a full suite of services including showrooms, public relations strategies, media consultations, show production and event planning, the agency has nine offices all around the world and now handles PR for over 70 brands, including Celine, Christian Dior, Givenchy and Simone Rocha , as well as beauty and lifestyle brands.

German-born Otto was a former runway model in the 1970s who walked in Milan, Tokyo and Paris before settling in Milan to work in the press department of Italian fashion brand Elio Fiorucci. After amassing a few years of experience, Otto set out on her own and quickly grew her client list to include some of the world’s most prominent fashion labels.

Hosting local showrooms for designer and brand clients, so that editors and members of the press no longer had to travel to the designer’s own showroom, was one of Otto's innovations. It was also under her guidance that Jil Sander grew from a local German womenswear label to an international fashion brand. Otto upholds the stereotype of wearing all black, as she told Harper’s Bazaar: “I prefer to focus on the shape and the texture. Besides, when you travel as much as I do — I'm in a different city every week —everything must go with everything.”

In 2017, Otto partnered with Paris- and Shanghai-based entrepreneur Isabelle Chouvet, founder of K2, which is an Asian experiential marketing and events agency. K2 has offices in Shanghai and Tokyo, and their clients have included the likes of Bvlgari, Louis Vuitton, Kering, Cartier and L’Oréal. K2 and Karla Otto merged to form a new umbrella entity called The Independents Group with over 400 people on its staff, though both agencies will continue to serve clients under their respective brand names. In 2019, Karla Otto also partnered with Dubai-based luxury communications agency, The Qode, to further their expansion into Asia. 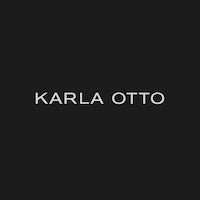 How to Make a Magazine Under Lockdown