The Spanish footwear designer has become a household name for his classically beautiful, elegant stiletto heels.

Manolo Blahnik is one of the world’s most esteemed shoe designers, known for his elegant and languid forms. “I know how to cut and cut away here (the side of the shoe) and still make it so that it stays on the foot. And the secret of toe cleavage, a very important part of the sexuality of the shoe. You must only show the first two cracks. And the heel. Even if it’s twelve centimetres high it still has to feel secure – and that’s a question of balance. That’s why I carve each heel personally myself — on the machine and then by hand with a chisel and file, until it’s exactly right,” Blahnik told Colin McDowell .

Blahnik's fame reached an entirely new level, however, after his brand was repeatedly name-checked on highly popular American television show "Sex and the City."

He has since capitalised on the boost in his global recognition, opening stores in London, New York, Las Vegas, Dublin, Athens, Madrid, Istanbul, Dubai, Kuwait, Hong Kong, Seoul, Singapore and Stockholm, as well as inking deals with the world’s best department stores.

Born in the Canary Islands, Blahnik studied languages and art in Geneva before making the decision to move to Paris to become a set designer in 1965. Following a move to London in 1968, Blahnik wrote for Italian Vogue and worked in Zapata, a buzzy London boutique.

On a trip to New York in 1970, Blahnik found himself showing his set and theatrical designs to the inimitable Diana Vreeland, who was at the time editor in chief of American Vogue. Vreeland’s eye immediately focused on Blahnik’s rendering of shoes and encouraged him to concentrate only on them. Blahnik took her advice and set about becoming a craftsman-cobbler, learning from machine operators, pattern cutters and technicians in factories.

He began to produce shoes in 1971, a year later Ossie Clark, then the most important designer in London, used his shoes marking the beginning of Blahnik’s worldwide acclaim. More recently, in June 2018, Blahnik announced the launch of a men's shoe boutique in London, with the aim of making men’s 20 percent of his business, and revealed plans for his first free-standing Paris store in October of the same year.

Blahnik has won numerous awards. The CFDA honoured him in 1987, 1990 and 1998. The BFC likewise has decorated the London resident in 1990, 1999 and 2003. The Design Museum in London put on a major exhibition of his work in 2003 and his sketches have been turned into a book ‘Drawings,’ published by Thames Hudson. 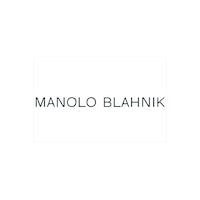