She established the upscale London retailer with her husband and was one of the first to stock Alexander McQueen and Hussein Chalayan.

Joan Burstein has owned and run London’s most influential boutique Browns since she founded it in 1970 with her husband Sidney. Her greatest contribution to the fashion industry, however, is her unerring ability to spot, stock and support avant-garde talent.

Dubbed "Mrs B," and thought of as the "fairy godmother" of fashion, Burstein is credited with being the first to stock Alexander McQueen, John Galliano , Gareth Pugh , Hussein Chalayan and Christopher Kane . “As a fashion buyer I will always take a risk,” Burstein exclaims.

It was also Burstein who brought Giorgio Armani , Donna Karen, Sonia Rykiel, Jil Sander , Missoni, Calvin Klein and Comme des Garçons to the United Kingdom. When asked about her talent for predicting fashion’s future stars, Burstein maintains, “[it] is nothing more than a hunch, it just happens. It’s a gut feeling. It’s gut instinct.”

Thanks to Burstein’s instincts, Browns has maintained its position at the forefront of London’s retail destinations. Describing her approach to stocking her stores, Burstein resolutely focuses upon the clothes themselves: "We buy only pieces we like, we edit tremendously. It's all about quality and individuality. It's all a concept. If I feel that something is a little bit different, then I'll take a small order. The designs must have a handwriting.”

Burstein has significantly expanded her business over the 43 years since Browns first opened. Her first store, the company’s flagship on South Molten Street, once a small boutique, now comprises five interconnecting townhouses. There are a further five stores in London.

Burstein is critical of today’s retail fashion market, “I think retail fashion has reached saturation point; there are so many shops stocking the same designers. It's boring - individuality is so important.” She credits Browns’ success to its individuality; “When we started Browns it was unique. We were offering French, Italian and, later on, American and Japanese brands - something that no one else was doing. Now everybody copies us.” She is absolutely right, they do.

She grew up in London where her aunts, who were court dressmakers in the city, first exposed her to fashion. Burstein and her husband ran underwear shops on London’s Oxford Street in the 1950s. Following the closure of those businesses, the Bursteins opened Feathers, where they would hire Manalo Blahnik as a shop assistant.

In May 2015 Farfetch acquired Browns, with Burstein and her family receiving a 2.1 percent stake in the company. She retired shortly after in 2016.

Burstein was awarded a CBE in the Queen’s birthday honours list in 2006, for her services to the British fashion industry. 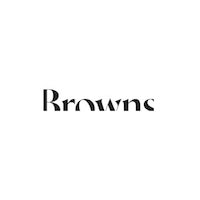 As Brexit Looms, Prime Minister Theresa May Looks to the Future of British Fashion