Starting with a range of 100 pairs of unisex denim, he and his partners created a Swedish cult lifestyle brand that has expanded globally.

Johnny Johansson is a co-founder and creative director of Swedish apparel company Acne Studios . Johansson founded the company in 1996 as part of creative collective that had ambitions to produce something novel, Acne is an acronym of Ambition to create novel expressions. The company began unconventionally, making 100 pairs of jeans with distinctive red stitching and gave them away to friends, family members and colleagues. In December 2018, Acne Studios sold minority stakes to China-focused investment firm IDG Capital and Hong Kong-based IT Group, ending almost a year of speculation that the brand would be acquired by a larger rival. Johansson and executive chairman Mikael Schiller remain majority shareholders in the business.

He was originally a musician, “I didn’t have a traditional fashion education, so for me it’s been learning, and trial and error. I like current and honest fashion. Working with my life, things that are very close to me at that moment, makes it current for me.” Today, the label, which remains privately owned, has over 60 retail stores in 15 countries. Acne Studios currently generates over €200 million a year and is growing fast. Turnover doubled between 2013 and 2016. The brand has previously collaborated with former Lanvin creative director and Michael Zobel, a German jewellery designer.

Johansson has crafted a highly desirable brand, that maintains an offbeat sense of difference, “it is not about delivering ideas or dreams, it’s about making them physical. And that’s a big challenge.” A big challenge Johansson invariably surmounts. 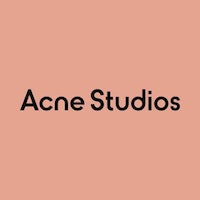