The designers behind the mid-price bucket bags that generated waiting lists the world over have expanded into footwear and ready-to-wear.

The design duo behind accessories label Mansur Gavriel is responsible for creating the first post-recession it-bag. Launched in 2012 with just two styles, including their now bestselling bucket bag, Gavriel and Mansur’s designs have had a 100 percent sell through rate at boutiques like Barneys and Bergdorf Goodman, and they have since expanded into footwear and clothing.

Their concept of creating handbags came out of personal needs. “There were few [bag] brands at the contemporary price point that held a good value,” Mansur told BoF. The product was two years in the making, during which time they created the first prototypes – one drawstring bucket and one top-handle horizontal tote. They took traditional vegetable tanned leather – a material mostly used in men’s accessories – coloured the interior and experimented with techniques such as silk screening leather at Mansur’s barn in Santa Monica.

After making samples in LA and NYC, they settled on Italy as the production base for their bonded leather bags. They compiled a spreadsheet of where they wanted to be stocked and with $100, shot their first lookbook and booked a booth at the capsule trade show in New York in February 2013. Their bags were picked up by reputable American independent boutiques including Bird and Creatures of Comfort, but it was Gavriel’s chance encounter with designer, showroom operator and multi-brand boutique owner Steven Alan at an art gallery in New York that got them going.

Their debut collection hit stores in early June 2013 and within weeks blogger, Garance Doré professed her love for the large black bucket bag lined in a shade of red the duo called Flamma. By July, both the bucket and tote had generated long waiting lists. By New York Fashion Week that September, Mansur Gavriel had become the bag of choice for fashion editors and street style stars.

With over 650,000 followers on Instagram, Mansur Gavriel’s social media platforms have helped with their rapid growth. Four years later, the designers launched their first ready-to-wear collection at New York Fashion Week, Most recently, the brand, which operates two standalone stores in New York City and one in Los Angeles, launched men’s accessories. Stockists include 24 Sèvres, MatchesFashion and Ssense. 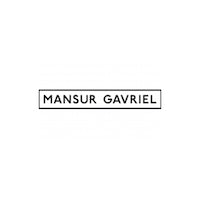 University of the Arts Bremen