The acclaimed art and design duo have lent their surreal, cross-disciplinary creative direction to designers, artists and musicians.

Their work has appeared in numerous titles including French Vogue, Purple Fashion, Man About Town and Les Inrockuptibles. Through their work in print, the pair have collaborated with noted fashion photographers and contemporary artists such as Pierre Huyghe, Philippe Parreno, Inez van Lamsweerde & Vinoodh Matadin , Liam Gillick and Sarah Morris.

In addition, the pair are regularly called upon by some of the most creative musicians in the business to craft exquisite narratives and atmospheric context for their work. Collaborators include Kanye West , Madonna, Björk and Mew.

Augustyniak and Amzalag met as students at the École Nationale Supérieure des Arts Decoratifs in Paris in 1988. Amzalag quit school in 1990 and started working as art director at the music magazine Les Inrockuptibles. Augustyniak continued to study at the Royal College of Art in London, from which he graduated in 1991. M/M Paris was founded the following year.

Initially, they worked mainly for the music industry, designing record sleeves, but soon transitioned to fashion and art in addition to their work in music. Their first fashion assignment was to design the worldwide launch of Yohji Yamamoto’s Y’s range in 1993. The pair were next commissioned to design campaigns for Jil Sander and graphics for Martine Sitbon.

In 1995, they met photographers Inez van Lamsweerde and Vinoodh Matadin, which saw the start of a longstanding collaboration, starting with a campaign for Thierry Mugler in 1995. The pair then worked on projects for Yohji Yamamoto, Balenciaga, Givenchy, Calvin Klein and in the process established themselves as some of the finest art directors working in both the music and fashion industries. 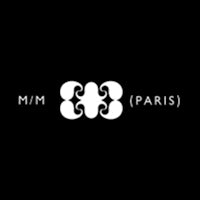