Imran Amed, Founder and CEO of The Business of Fashion 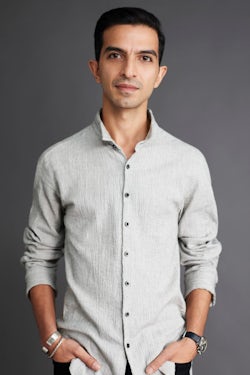 Imran Amed is one of fashion’s leading writers, thinkers and commentators, and is founder, CEO and editor-in-chief of The Business of Fashion (BoF), a modern media company and the authoritative voice of the $2.5 trillion global fashion and luxury industries. Headquartered in London, BoF receives more than 1.5 million unique visitors per month and has more than 6 million followers on social media.

Imran began his career as a management consultant and started writing a blog about the fashion business from his sofa in London in 2007. He had no professional experience or training in fashion but had long been fascinated by the industry, and its intriguing blend of creativity and business. From the start, BoF sparked a new kind of fashion dialogue, exploring the key drivers of an industry with a retail and manufacturing footprint that spans the globe undergoing unprecedented change and rapid growth. Social media and new technology were about to explode onto the fashion landscape, new markets in China, India and Brazil were growing in importance, and the financial crisis of 2008 created a step-change in consumer values and expectations. The fashion industry was emerging as a force in global business and popular culture and there was much to analyse, dissect and explore.

Imran’s writing filled a void in fashion media and soon his analysis garnered tens of thousands of readers who would wake each morning to The Daily Digest email newsletter. In 2013, Imran raised $2.5 million in seed funding, led by Index Ventures, alongside a wide range of respected investors from the worlds of fashion, technology, and media, followed by a Series A investment round in 2015 led by Felix Capital. In 2019, BoF announced a new collaborative partnership with the Financial Times, one of the world’s leading business news organisations, which led a Series B investment round in The Business of Fashion.

Today, the BoF team is present in London, New York, Los Angeles, Paris and Shanghai, overseeing BoF Professional (a subscription membership which is now the world’s largest community of fashion professionals), BoF Careers (the global marketplace for fashion talent), and VOICES (an annual invitation-only gathering for leading thinkers and innovators from inside and outside fashion).

In 2014, Imran was the youngest ever recipient of the Desautels Management Achievement Award at McGill University. In 2015, he was named Honorary Professor of Fashion Business at the Glasgow Caledonian University. In 2017, ten years after founding BoF, he was appointed by Queen Elizabeth II as Member of the Order of the British Empire (MBE) for services to the fashion industry. In 2018, Imran was awarded an Honorary Doctorate from Central Saint Martins College of Art & Design. He has also been named in Fast Company’s annual list of the Most Creative People in Business, British GQ’s list of the 100 Most Influential Men in Britain, Indian GQ’s list of the 50 Most Influential Global Indians, and Wired UK’s list of the 100 most influential figures in Britain’s digital economy.

Imran holds an MBA from Harvard Business School and a B.Com from McGill University. He was born in Canada and holds British and Canadian citizenship. Previously, Imran was a management consultant at McKinsey & Co.