Instagram stories posted by the school’s fashion and textiles course account have sparked a backlash from members of the Chinese fashion community.

LONDON, United Kingdom — Central Saint Martins’ fashion and textiles foundation course has been called out by its Chinese student body for showcasing academic projects they deem to be racist and offensive on its social media.

The famous London art institution’s fashion and textiles foundation programme this week reposted a series of Instagram stories on its official account (@fashion_textiles_csm) featuring student artwork created during a textile workshop led by French artist Damien Poulain. One of the student banners displayed the slogans “Fuck Fashion,” “中国制造” ( “Made in China”) and “£0 worth” alongside a motif resembling the Qing Dynasty flag and braid, which was held up in front of H&M and Coach storefronts.

The image, originally shared by one of its creators, was reposted to the programme’s official account with ‘raised hands’ emojis.

A second repost to the account showed a banner reading “光復香港，時代革命,” or “Liberate Hong Kong, the revolution of our times.” Both posts, since taken down, have riled members of the school’s Chinese student body. One, using the handle @moothemonster, sent a direct message to the programme account deeming the first post “cultural fascism.” 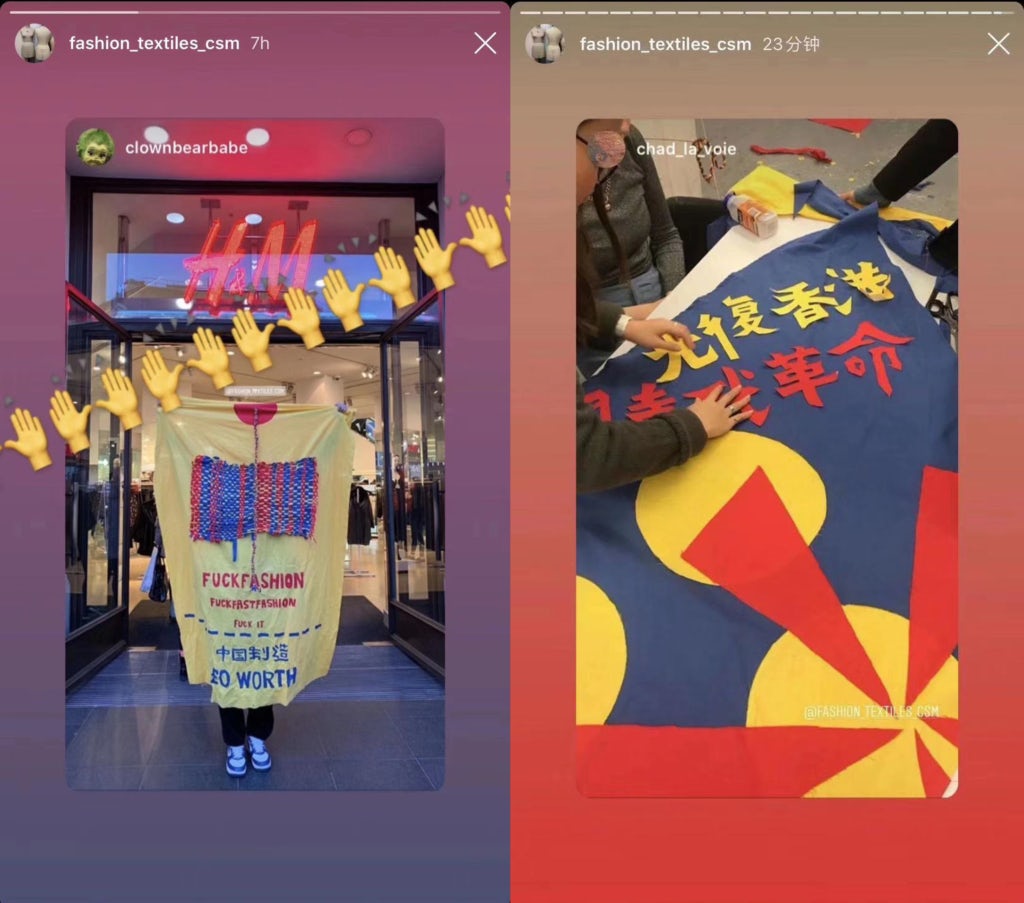 The message said,“for an education institute to promote racism and extremely biased political [views] is disgusting. For an art and design institute to endorse an action that attempts to negate not just a nation’s, but a culture’s [values] is even more vile.”

Central Saint Martins, Damien Poulain and @fashion_textiles_csm have not responded to BoF’s request for comment, but the course account has published an Instagram story that included the statement: “It’s come to our attention that two of the banners made have caused offence and for that we’d like to apologise. The groups of people who made the works weren’t being derogatory but we understand that without seeing the prep work and development, the banner itself can be taken out of context.”

The statement added that students “were tasked with writing a manifesto which addressed the issues that they were passionate about,” and “created banners which visualise their manifestos.” The account would soon upload the student manifestos, “so that there is an understanding of what they were trying to say without it being reduced to a simple graphic.”

In recent years a record number of Chinese students have moved to London to study at its renowned art schools. Between 2009 and 2014, UAL saw a 100 percent increase in its number of Chinese students, and according to its website, it works with official representatives in four regions across China to support students looking to apply to its schools.

The designers deemed the move “an endorsement of cultural ignorance towards Chinese students, alumni, and wider Chinese communities all around the world."

Criticism of the banners has since appeared on Chinese social media platform Weibo. “I don’t understand, what would you wear without ‘Made in China’?” User @答应我找到了呀不要装不认识好吗_ asked. “This unintentional wrongdoing is where the racism lies,” @mdd_jennybunny wrote. “They wouldn’t be doing the same towards black or LGBTQI people.”

A group of Chinese designers and University of the Arts London (UAL) graduates, including Xuzhi Chen, Angel Chen and Percy Lau, have also penned an open letter addressed to Chancellor Grayson Perry. The designers deemed the move “an endorsement of cultural ignorance towards Chinese students, alumni, and wider Chinese communities all around the world.”

“It is inappropriate for CSM’s official Instagram outlet to promote and support said images without fully identifying the [cultural] insensitivity embedded in the artwork,” the letter added. Dan Cui, former fashion director at GQ China and founder of brand consultancy Caius, and Labelhood Founder Tasha Liu, have been among the Chinese fashion industry leaders that have voiced their support on social media.

This is not the first time that a UAL school has been criticised by Chinese netizens for showcasing politically sensitive content. This June, an article circulated on Chinese media that deemed a UAL media student’s project advocating for Tibetan independence and use of the word “genocide” an “insult to all Chinese people.”

Central Saint Martins' Dean of Academic Programmes Rachel Dickson has replied to the open letter sent on November 14 through the school's social media accounts. The reply, addressed to alumni and students, said, in reference to the statement on images posted to Instagram: "We accept that the imagery and language used in the artwork caused offence, as did the course's initial response to concerns...We agree that it was not appropriate to publish images on our Instagram account without fully identifying the cultural sensitivities embedded in them and the debates surrounding the works' production and exhibition. We offer an unreserved apology and will learn the lessons from this."

Escaping the Wrath of China’s Netizens