NUKU’ALOFA, Tonga — When the Costa-Atlantica cruise ship docked last month in Tonga, the 2,000 Chinese tourists aboard were greeted by none other than the Tongan Prime Minister, ‘Akilisi Pōhiva.

Set to the melody of a brass band and an impassioned traditional dance, the ceremony celebrated the first large batch of Chinese arrivals since the Pacific island nation lifted visa restrictions for all Chinese nationals last August. The event was no doubt a historic moment for the tiny Polynesian kingdom with just 100,000 residents, but it signified something bigger for the Chinese as well.

In China, travellers tend to mobilise in waves, with the two highest traffic periods being the Golden Weeks following Chinese National Day and Chinese New Year. In October 2016, after National Day, half a billion Chinese tourists embarked on travels, both domestically and abroad. But the Chinese New Year period, which kicks off today, has been dubbed the largest human migration on the planet.

Also known as the Spring Festival, this year’s holiday is celebrated from the day of the Lunar New Year on January 28th for about a week. In addition to the hundreds of millions readying to travel around China, travel agency Ctrip predicts a record-breaking number of trips abroad, exceeding last year’s six million. And for many taking part in this exodus, shopping will be a high priority. 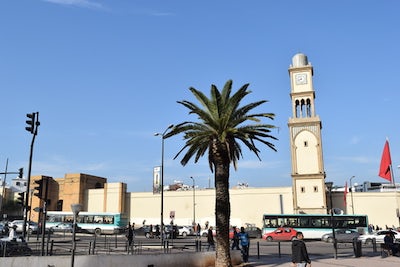 Traditionally, for outbound travellers, popular international destinations were limited to the retail capitals of Europe, the US and a relatively small radius around East Asia. Predictably, places like Hong Kong, Thailand, Korea, and Japan topped the list for the overwhelming majority of vacationers. But as the recent celebrations in Tonga indicate, the tides are beginning to change. As several countries across the globe relax visa restrictions for Chinese arrivals, tourists from the mainland are expanding their horizons abroad.

Hassle-Free Travel for the Adventurous

“What we are seeing is that there is, more than ever, a growing sophistication and curiosity among Chinese travellers,” says Phillipe Schaus, chief executive of the LVMH-owned duty-free operator DFS Group. “They are considering more destinations than in the past, and their expectations have changed.”

The Chinese New Year Period, which kicks off today, has been dubbed the largest human migration on the planet.

Bragging rights seem to play a part. For a certain profile of Chinese traveller, the desire to be the first among friends to experience a destination is strong. “There is this common gripe that you sometimes hear [when] they go to somewhere like Paris or Thailand. [Chinese travellers say that] there are just too many other Chinese tourists there, that it makes the experience less enjoyable than maybe it would be otherwise,” explains Avery Booker, a former partner at China Luxury Advisors who is the co-founder of Enflux, a predictive global influence mining and monitoring platform.

Visa exemptions are an effective way to attract travellers because they reduce the cost and hassle of red tape while making itineraries more flexible. By doubling down on visa-free tours, after opening ten new ‘red tourism’ routes in June 2015, Russia experienced a 16 percent year-on-year increase in arrivals from China, buoyed by a weak ruble according to Euromonitor, from 2015 to 2016.

But this phenomenon is just as much a cause as it is an effect. The UAE began to grant visas on arrival for Chinese travellers starting in August of last year in response to the 29 percent year-on-year surge it experienced in 2014-2015. As the UAE’s shopping mecca of Dubai became a popular destination welcoming some 450,000 Chinese visitors, newer off-the-radar destinations followed suit.

Morocco and Peru Open Their Doors

After seeing a 16 percent increase in Chinese tourists to nearly 20,000 from 2014-2015, Peru began waiving visa requirements last September for Chinese nationals who had already secured visas for the US, Canada, Australian or Europe’s Schengen zone. And as more countries relax visa restrictions, some are scrapping them altogether.

A favourite from this new pack of destinations is Morocco, whose National Tourist Office is pushing for 100,000 yearly Chinese visitors as part of its Vision 2020 plan to become one of the top 20 tourist destinations globally. The North African nation waived visas for all Chinese tourists last June and has since seen an 11.6 percent increase in arrivals from the mainland between 2015 and 2016, according to Euromonitor.

Converting new Chinese visitors into shoppers of fashion and luxury goods is easier for destinations like Morocco than it is for the likes of Tonga. Spearheaded by domestic leaders like the Aksal Group, Morocco has developed a retail ecosystem that includes not only Africa’s second largest shopping mall but also numerous points of luxury distribution for brands like Louis Vuitton and Gucci. Despite its immense growth in the last few years, however, the country’s Chinese strategy is in infancy.

“The types of [Chinese tourists coming to Morocco] are medium and high-income individuals. Not really [low-income] tourists, because it’s a long trip, and there are no direct flights,” explains Sofia Benbrahim, the Casablanca-based founder of Shoelifer and former editor-in-chief of the Moroccan edition of L’Officiel magazine. “People coming are those who are used to going to Europe. They’re already travellers.”

Since travellers do not arrive with the sole intent to shop, investing in the retail ecosystem requires streamlining the travel experience first. “Start by offering the necessary infrastructure: [the Chinese] need buses, they need people speaking Chinese and when this step is complete… they will [at least] have the infrastructure for buying,” says Benbrahim.

The types of Chinese tourists coming to Morocco are medium and high-income individuals.

In many ways, Morocco still lags behind its European counterparts when targeting the Chinese, particularly during high-traffic periods. “There is [not yet] any Chinese New Year animation, decorations, or merchandising here. It is still very fresh,” adds Benbrahim. “Chinese visitors to Morocco are looking for experiences. They’re crazy about the fact that you can have the desert and you can see the sea in the meantime. When they come, they travel around the country a lot: they go to the south, then the north.”

What the popularity of Morocco highlights is that there is a new breed of Chinese adventurer with more unpredictable travel patterns; travellers whose motivations are increasingly varied. This trend was corroborated by Vogue China editor-in-chief Angelica Cheung in an interview with BoF and McKinsey & Company for the joint report ‘The State of Fashion 2017’. “Now that Chinese are spending overseas, they put more effort in experiences and learning, personal improvements and health,” Cheung said.

These developments are raising flags among duty-free retailers around the world, who are most susceptible to the shifting flow of travellers. In response, operators like DFS are investing in destinations off the beaten path to expand their retail network, which already has 420 points of sale around the world spread across 17 major airports.

“We forecasted this some years ago, hence our investment last year into destinations such as Siem Reap [Cambodia] and Venice that have long been considered culturally appealing to western travellers, and which are now very desirable to [Chinese] travellers looking to broaden their knowledge and appreciation of the world,” says Schaus.

Another of the three major duty-free operators cited by the Moodie Report is Dufry, which has airport stores in eight Moroccan cities. Lotte, which is strong in the Asia-Pacific region, opened a store in Guam, an increasingly popular destination for Chinese travellers. But despite these efforts, operators are aware that it is both economically unfeasible and logistically impossible to cast a net so vast that it captures every emerging destination.

“I think [duty-free operators] are going to have to tough it out. Because they can, of course, put more DFS locations in places like Peru or Brazil or places that the Chinese are travelling. But it’s like a game of Whack-a-Mole,” explains Booker. “You never really know where the mass of people is going to be headed next. Hong Kong, even though it has declined, is still going to be a place that people travel to — it’s just a fact.”

“For every Chinese tourist who is very seasoned and is now going to the most obscure destination and buying the most obscure brands, there are still five-to-ten first-time travellers who are excited to be [in Paris] on the Champs-Élysées taking selfies with their friends,” he adds.

While duty-free airport operators face the increasingly perplexing task of responding to the unpredictable nature of the modern Chinese traveller, cruise operators are seizing the issue as a travel retail opportunity. 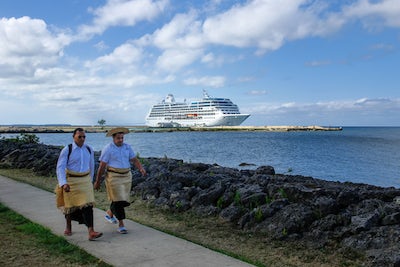 Between 2010 and 2015, the Chinese cruise market grew from $5.1 billion to $8.2 billion, according to Euromonitor. Although China only represents 14 percent of the global cruise market, a 59 percent increase in just half a decade has given cruise operators plenty of optimism. Cruise shopping could be a pertinent solution for those who want a world-class shopping experience even when travelling to vacation destinations away from fashion capitals and major retail hubs.

However, Booker warns against overly optimistic performance for the fashion and luxury goods categories. “I think ultimately what’s going to happen is that they are going to get some traction with much older consumers,” he predicts. Pointing to the case of cruise ships that currently disembark in Japan, he explains that Chinese shoppers “are wiping out things like the electric toilet seats and beauty products and electronics, but not so much luxury retail or fashion products.”

But whether the nascent cruise market takes off or not, this Chinese New Year is expected to boost many conventional fashion retailers around the world.

“One thing that is unique about the Chinese market is the vast population size. These people who have never travelled before are still the vast majority of the country. There is still plenty of room for growth,” says Booker.