MOSCOW, Russia — For Alexander Pavlov, the decision to dramatically cut prices at Russia’s famed luxury department store was a risk worth taking. Though it was at a time when local customers were tightening their belts, Tsum’s chief executive saw an opportunity where others did not.

Over the last few years, Russia has witnessed a new kind of tourist hoping to take advantage of the weak rouble — one of the world’s worst-performing currencies over the 2014-15 period. The Russian economy has been suffering due to a combination of factors including low oil prices and international sanctions resulting from geopolitical tensions with the West.

“After barely avoiding a recession in 2014 — with 0.7 percent growth — the economy contracted by 3.7 percent in 2015,” says Alex Sukharevsky, a Moscow-based senior partner at McKinsey & Company. “The recession continues into 2016, but it is expected to be limited to 1-2 percent with forecasts improving as oil prices rebound. Most analysts expect a return to modest growth in 2017 at around 1 percent.”

Official data released in August 2016 by Rosstat, Russia’s statistics service, showed that Russians’ real disposable incomes had fallen at the fastest pace in seven years. Many Russian consumers have been struggling to maintain the lifestyles to which they became accustomed in the boom years.

“Consumer confidence experienced a double-dip decline in 2014-16, although the drop has been more modest than during the 2009 crisis. Overall retail sales were down 10 percent in 2015 and keep decreasing in 2016,” Sukharevsky adds.

Yet one silver lining in the country’s otherwise dim market environment is that Russia has emerged as a more affordable place for foreigners to shop. Typically, Russian retailers are at a disadvantage because of euro-denominated designer fashion and heavy import duties. This can amount to luxury goods being 20 to 30 percent more expensive than the same items at retailers in France or Italy, depending on product category.

However, by the middle of 2016, the rouble was trading at half the value it was to the dollar two years earlier. For affluent shoppers willing to travel from abroad, unlikely though it seemed, Russia suddenly had the potential of a bargain hunter’s paradise.

If they were fast and bold enough in their approach, Russian retailers could now finally offer globally competitive prices to help compensate for the shortfall in domestic spend. Pavlov wasted no time adjusting Tsum’s prices down to make the department store even more attractive to international customers hungry for anything from Armani to Zegna.

After slashing the prices of handbags, Pavlov says the company soon tripled sales of its accessories business, which led him to cut prices on shoes and finally on ready-to-wear. The risk he took to lure in foreign shoppers by discounting paid off, he says, resulting in an estimated 40 percent year-on-year sales increase for Tsum between 2015 and 2016. 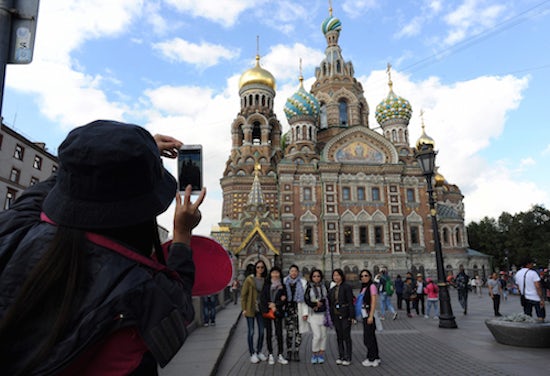 What makes Tsum’s 2016 business illuminating is not only its role in helping to make Russia an unexpected international shopping destination. It is the fact that many of those who Pavlov attracted were from China.

“After we lowered our prices, we started advertising inside airports and airplanes and we connected later with them on social networks so we were able to increase sales with the Chinese by five-fold,” says Pavlov.

“For Asian tourists in particular, it is often easier to come to Moscow rather than travel to Europe,” he adds, referring to the shorter flight time from cities in China to Moscow compared to destinations in Western Europe.

The Chinese spent around $1 billion just in Russia in 2015 and 60 percent of it was on shopping, according to various estimates. Rosstat’s data reveals that the number of Chinese tourists increased 65 percent year-on-year from 2014 to 2015. It counted 677,619 of them in 2015, but this figure does not include Chinese visitors coming for business or other purposes besides tourism. Therefore the total number of Chinese visitors to Russia was actually twice as high.

The positive trajectory continued in the first half of 2016. In fact, a Federal Agency for Tourism tally of all inbound tourists to Russia revealed something interesting. While the total number of foreign visitors was down 5 percent year-on-year, Chinese visitors were up 9 percent, earning them the rank of fifth highest out of all nationalities visiting Russia.

The Rise of ‘Red Tourism’

The Chinese view Russia as an exotic yet familiar enough destination, a place where tourists are emboldened by the weak rouble, visa-free group travel and a growing nostalgia for visiting communist sites beyond those in China.

A peak in so-called ‘red tourism’ has made sites such as Karl Marx’s house in Germany and Vladimir Lenin’s birthplace in Russia popular among a certain profile and generation of Chinese travellers. Cuba is also expected to profit from this phenomenon now that Air China opened a flight from Beijing to Havana.

But Russia, as the successor state to the Soviet Union, is by far the destination with the greatest diversity of perceived landmarks and memorabilia outside China itself. The backdrop of an historic alliance between the two countries certainly helps.

In 2015, the neighbours signed a $25 billion deal to boost flagging trade and Chinese lending to Russian companies. As part of an agreement to deepen economic cooperation between the two, they also decided to open more ‘red tourism’ routes in the future.

Growing Chinese tourism is one way Tsum hopes to continue to defy the downturn in Russia’s economy. Pavlov says he expects the number of tourists to increase by three to five times in 2017 and he hopes to convert as many of them as he can to become Tsum shoppers.

However, critics consider this revenue stream precarious at best, as it is predicated on a continually weak rouble against other major currencies that make up the currency basket behind the Chinese yuan. Nevertheless, Pavlov remains optimistic. He aims to grow the number of Chinese customers to 30 percent in the next two to three years, from the current 9 percent that Chinese account for in terms of overall sales at Tsum’s Moscow flagship. At its sister department store DLT in St Petersburg, which like Tsum is part of Russia’s largest luxury retail group Mercury, the number is even greater. There, the Chinese account for 22 percent of overall sales, he says.

“We want to increase awareness in China and make Chinese customers know that Russia is the best place to travel and shop in Europe,” Pavlov says. “We’re very China-friendly. We have Chinese navigation in both department stores, department store guides in Chinese, Chinese speaking staff, special offers for our foreign customers, and we’ll keep on improving our loyalty programme for them too.”

The company is working closely with Russian and Chinese tour operators, as well as the Russian tourism board to promote its stores to Chinese tourists.

“Tsum is definitely taking advantage of the trend,” says Christian Kwok, art director at Vogue Russia, who has noted the increase in Chinese visitors. “They have already put up signs in Chinese indicating that tourists are welcome to purchase goods with a similar price to Milan and Paris, and even a Chinese sign in the parking lot. There was only Russian and English before.”

The company is also offering a special discount to overseas tourists, Kwok observes, to perhaps make up for the current lack of a duty-free shopping regime in Russia — though there are reports that the country may introduce one in 2017.

Another draw for some Chinese is the perception of security in Russia. Moscow is increasingly considered to be a safe option compared to cities in Western Europe, says Kwok, noting that past terror attacks in France and Belgium remain a concern for many Chinese travellers.

It is important to note that Russia still attracts comparatively few Chinese shoppers when seen in the context of those travelling to retail hotspots in Europe, South Korea, Hong Kong and Japan.

However, Pavlov stresses that even in relatively small numbers, the Chinese have already been a welcome relief for luxury fashion players like Tsum operating in a sector that is clearly struggling in Russia. And he remains as enthusiastic about their potential in the coming years as he does about his plan to attract more through his doors.